Last Friday I had an extraordinary day. I woke up at 5 am in Windermere, England. It was February 5, the day on which WOWSA would present their awards.

True to my promise, I planned my last workout of the week, a 4000-meter swim in the public pool in Kendal, a town near where I was staying.

Friday I’d sent an email notifying all the winners that I would be leaving the hotel at 6.10 am, in case anyone wanted to come along. Bridgette Hobard, the Woman of the Year award winner, ended up joining me. We had an instant chemistry. On the way to Kendal we discussed our swimming projects, and the 20-minute trip passed by unnoticed.

The transition from Amsterdam Olympic pool to this tiny facility was a shock. I noticed the difference immediately, starting with a counter-clockwise direction in some lanes and water that barely reached my knees in the shallow end.

I eventually found the pace clock, hidden behind bars on one of the walls near the edge of the pool, and we started our series: 5 x 800 meters, with different combinations.

Our first 800m segment would be with fins and snorkel. It would be quick in this pool, and I was excited to feel the speed I reached with the fins.

Concentrating so as not to forget my form, entered around 300 meters and passed one of the swimmers in the lane. I lifted my head out of the water and heard an alarm. A lifeguard, a young man about 20 years old, called over to me.

With that distinctive English accent, he told me, “Sorry sir, today is not a fin day.”

I did not understand what he is telling me. Realizing this, he approached with the pool hours in hand. It’s a half page letter, jammed with so much information that you would need reading glasses to be able to make it out.

“You see here, sir, fin day is on Wednesday. If you wish you can come back next week and use your fins.”

It was the day of the awards, so it wasn’t going to bother me. In fact it was not even worth discussing with him. I remembered I was in England—the sheer amount of rules here is incredible. This would be my momento Inglés—my English moment.

Back at the hotel, I went down to breakfast with Lucía. Lewis Pugh suddenly arrived and asked if he could sit with us.

I had met Lewis last night. He would be the speaker at the ceremony. We had exchanged jokes about our candidacies.

When they announced the nominations, I had no idea who the other swimmers were. It was Nora Toledano and Mariel Hawley who immediately informed me, in no uncertain terms, that that Lewis was a major celebrity in the swimming world. “Like, if you’re local, he’s global.” “Look,” said Mariel, showing me his Twitter account, “he has 58,203 followers and is also a UN Patron of the Oceans.”

When we talked, he told me that he did not dare to ask anyone to vote for him. I answered that I not only dared to, but had loved doing so, and, above all, to have won.

We chatted for almost an hour, and I listened to his stories of Carl Lewis, Putin, Russian generals, summers in the Arctic, and kayak training in South Africa. As Lucía said, I behaved well—I let someone else speak.

During the day we explored the Lake District, enjoying the scenery and learning a little of this region of England, the birthplace of the poet Wordsworth and residence of the writer Beatrix Potter.

At 7 pm they opened the doors of the room. After we entered, we sat with Bridgette, her husband Bob, and a group award-winners from Russia, all of whom were icy-waters specialists.

When I think of cold water, I think of 12 or 14 degrees—the North Channel, for instance. For these Russian swimmers, that’s nothing. Their daily swim is in 3-5ºC waters. It was fun talking with them. They prepare all year for longer races whose longest distance is one mile.

Prior to the presentation of the award, Pugh told three stories about three different encounters: the 1 km swim in the North Pole, his swim across the Maldives in the Indian Ocean, and the men who lived on Robben Island, South Africa, as prisoners.

Pugh advised, “The first story about the North Pole is about our underlying fears. We have to muster up courage. Every single person has hopes, dreams, and ambitions. The only thing that is stopping us is fear. Do not be dangerous or foolhardy. Planning and preparation must be meticulous. Put fear aside.”

His second story about his swim across the Maldives is about the fundamental issue of limitations that people place upon themselves. “We must identify those limiting beliefs and surround ourselves with a team of talented individuals around us.”

His third story about Robben Island was about two men who stood up for what they believed is right. “Their story is a story about each of us and how we each live our lives. There are so many injustices in this world. Do not turn your back on these injustices. Do not think it is the role of someone else. Stand up and do not ignore the injustices of this world.”

The key points of his discussion are not far from what I try to accomplish with my swims. Their political impact, however, is something that has been lacking from my initiatives. I left thinking it would not be a bad idea to find a parallel in my swimming.

In recent days I had been debating what I was going to say. There was no doubt I had to thank my mother for all of her support, but then what was I going to say after that?

Last November I received an email from Steven Munatones in which he told me that prior to the WOWSA award ceremony, under the jurisdiction of the Big Chill Swim Association, there WOWSA announced an association with the World Swimming Association (WSA) and the World Swimming Coaches Association (WSCA). The aim of the new federation was to establish a truly global organization that can truly develop and grow the open water swimming.

When my turn came, I make the audience laugh with my “fin day” story, and then used my time to thank Steven for everything he’s done to promote swimming in the open waters.

Before dinner he and I talked. In essence, the covenant that had been made that morning was a way to work against the strength of the International Amateur Swimming Federation (FINA). The idea makes sense: today the sport is still controlled by these agencies, which answer to no one and are not transparent in the use of their resources.

For me it is a cause worth supporting. Hopefully, like Lewis, I can use my swims to support a cause that improves the world. 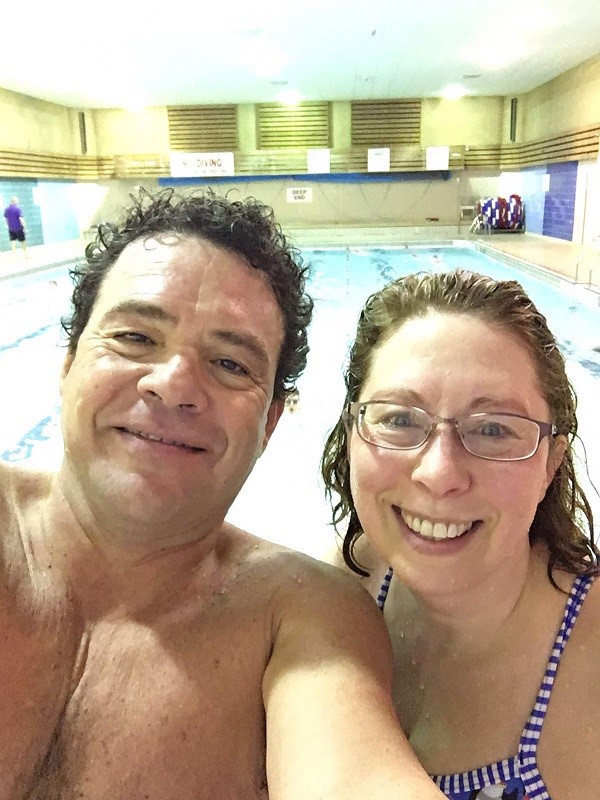