In August 2017, when I completed the Oceans Seven, I promised my wife Lucía that I would not do any open water swims in the next two years and that I would wait until 2020 to attempt a double crossing of the English Channel.

I got in touch with Mike Oram, my English Channel pilot, and he offered me a date in the weather window from August 26th to September 1st, 2020. I had a goal once again.

The first year I mostly ran and biked; I swam a little and worked hard on strengthening my body. Then, in August of last year, my coach Rafa Álvarez designed the training program for my English Channel mission. We agreed that I would need to do a long training session in the Catalina Channel a year before my window began.

I did the paperwork with David Harvey, captain of the Pacific Star, filled out the Catalina Channel Swimming Federation’s application, and made sure that Dan Simonelli was available to serve as my kayaker. My Catalina Channel double crossing date was set for August 26th, 2019.

Two weeks before the swim, Dan sent me the following message: “I have been monitoring the tides and currents and I think we should leave on Sunday, August 25th. Can you arrive on Thursday, the 22nd? I will make the necessary arrangements with David.”

I agreed without hesitation and on Thursday I arrived with my team in Long Beach. For three days we made the last adjustments and did some workouts in the water, in addition to sessions of chi-kung, energy training, and muscle activation techniques (MAT).

On Sunday at four in the afternoon we set sail for the departure point. A few minutes before diving into the water, I approached David and asked him:

“If you manage to finish each lap in less than 12 hours, they will always be in your favor.”

When I started swimming, my goal was to reach Catalina in 12 hours or less. By the fifth hour I was already halfway, and improving my personal best of 10 hours and 25 minutes became a real possibility.

However, four hours later the currents shifted, and I ended up finishing my fifth crossing of the Catalina Channel in 11 hours, 53 minutes and 23 seconds.

The rules allow for 10 minutes of transition between each segment of the swim. My team and I had planned a routine, and with the help of Dan Simonelli, my station was ready when I landed. Stretched out on the beach was my mat, flanked with Vaseline and a cup of soup.

I used the time I had for various things. After drinking soup calmly during the first few seconds, I did a two-minute stretching routine. I had more soup and did MAT exercises for another two minutes. Then I finished my soup and applied Vaseline to my body. The rest of the time I devoted to meditation. I focused on relaxing my back and shoulder muscles and visualized the return trip ahead of me.

At around six in the morning we started the journey back with an incredible sunrise, but trouble soon arose. My Garmin began losing signal, and about two hours into the second leg, the battery ran out. Without notion of time, confusion took hold of my mind. Moreover, conditions began changing: the winds increased in strength, and the current turned against me.

The straw that broke the camel’s back was the kayaker shift that took place three hours into the second leg. Dan and I had agreed that the three kayakers would rotate every four hours. When Dan was replaced, I assumed I’d been in the water for sixteen hours, but I was wrong: without telling me, they had decided to shorten the shifts one hour, so in reality I had only been swimming for fifteen hours.

My mistaken calculation came as a shock. In the first four hours of the return leg, I had covered 25% less distance than in the first leg (or so I thought). That is, instead of swimming at three kilometers per hour, it seemed like my speed was only 2.25 kilometers per hour. That meant it would take me about fifteen hours to complete the second leg of the swim.

This realization made me lose focus; I doubted my ability to endure and went into crisis. I called the crew and everyone on board approached the stern to listen to me. Rafa asked me to keep swimming for a few minutes while he got ready to jump into the water. He told me he would swim with me until midpoint. We talked for a few minutes and I asked him to get in touch with Jaime Delgado, my mental coach, to help me get over the crisis.

Jaime’s message arrived: chi-kung for half an hour and another 30 minutes of concentration in “the whirlpool.” An hour went by and Rafa began putting me on sets like the ones we had practiced throughout the year. We started alternating sets and mental exercises every 30 minutes, and the strategy worked: the crew informed me that I was moving at 2.8, 3.0, and even 3.6 kilometers per hour.

When it was Dan’s turn to take over the kayak once again, I thought we were already in the twelfth hour of the return leg, though we were only in the ninth. I was 10 kilometers away from the coast, which was already in sight, but something was off. The sun’s position did not coincide with the number of hours I’d been in the water.

Somewhat disappointed, I made up my mind that my total time would be around 26 hours, maybe a bit more, but I still felt happy to be so close to achieving my goal.

My friend Brad Howe swam the last meters with me and together we arrived at the beach. I had trouble standing and, after a photo was taken, I felt very cold and began to tremble. I needed to return to the ship as soon as possible so that Ariadna, my doctor, could look after me. I did not want to pass out again, like in Hawaii.

When I came on to the boat, Rafa was almost in tears.

That’s when I realized what I had just done: I had swum for 24 hours at a constant pace of 2.07 meters per minute. Not bad for my sixty years of age.

And that’s how I checked off my first big training challenge on the road to the double crossing of the English Channel. Now it’s time to keep training. 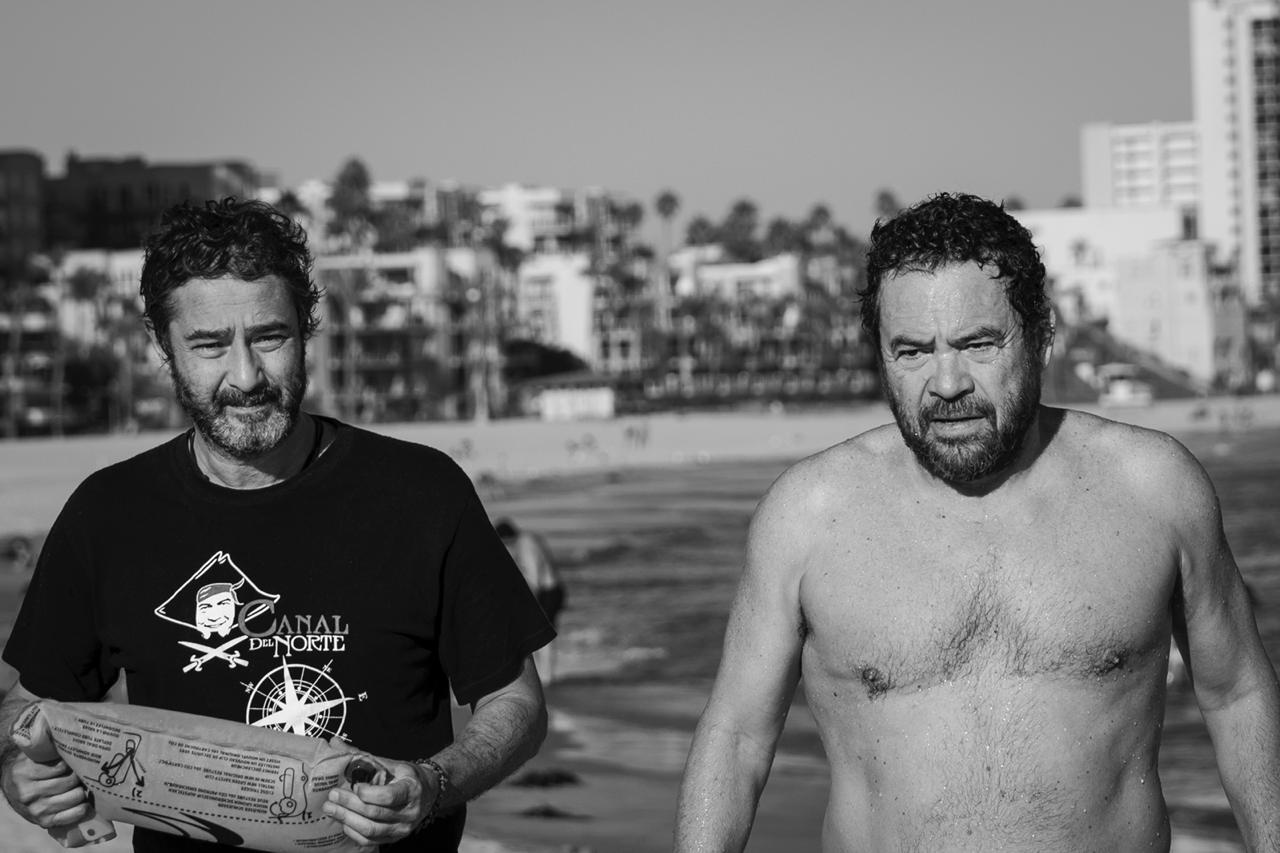 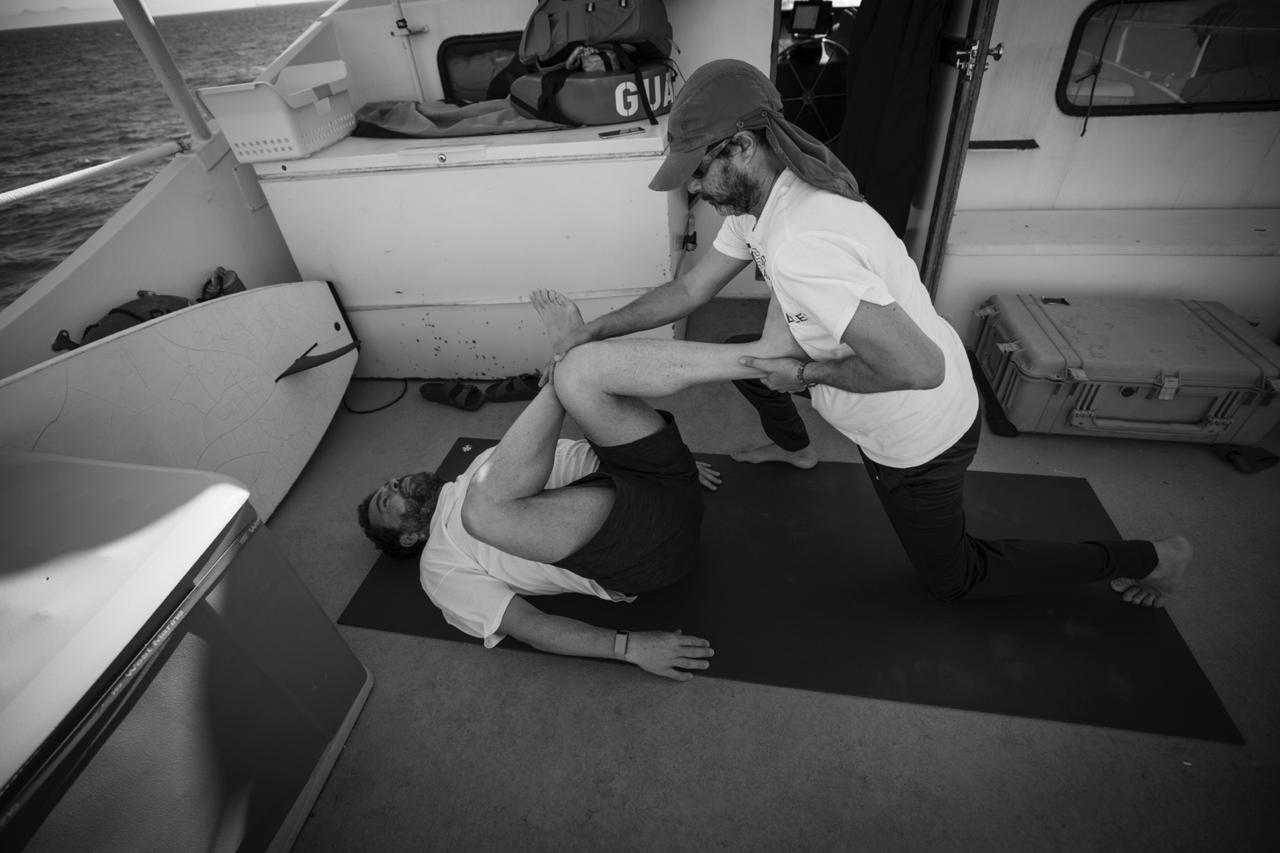 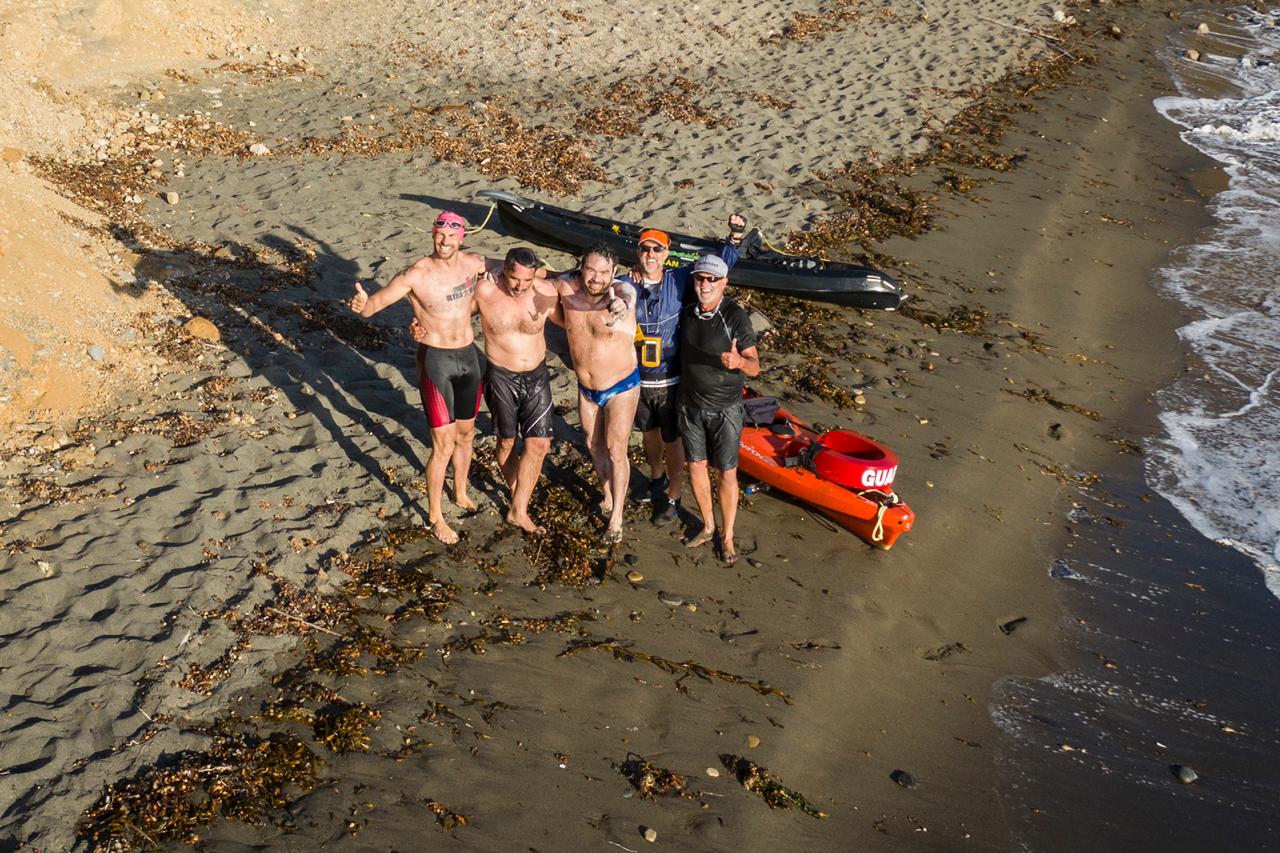 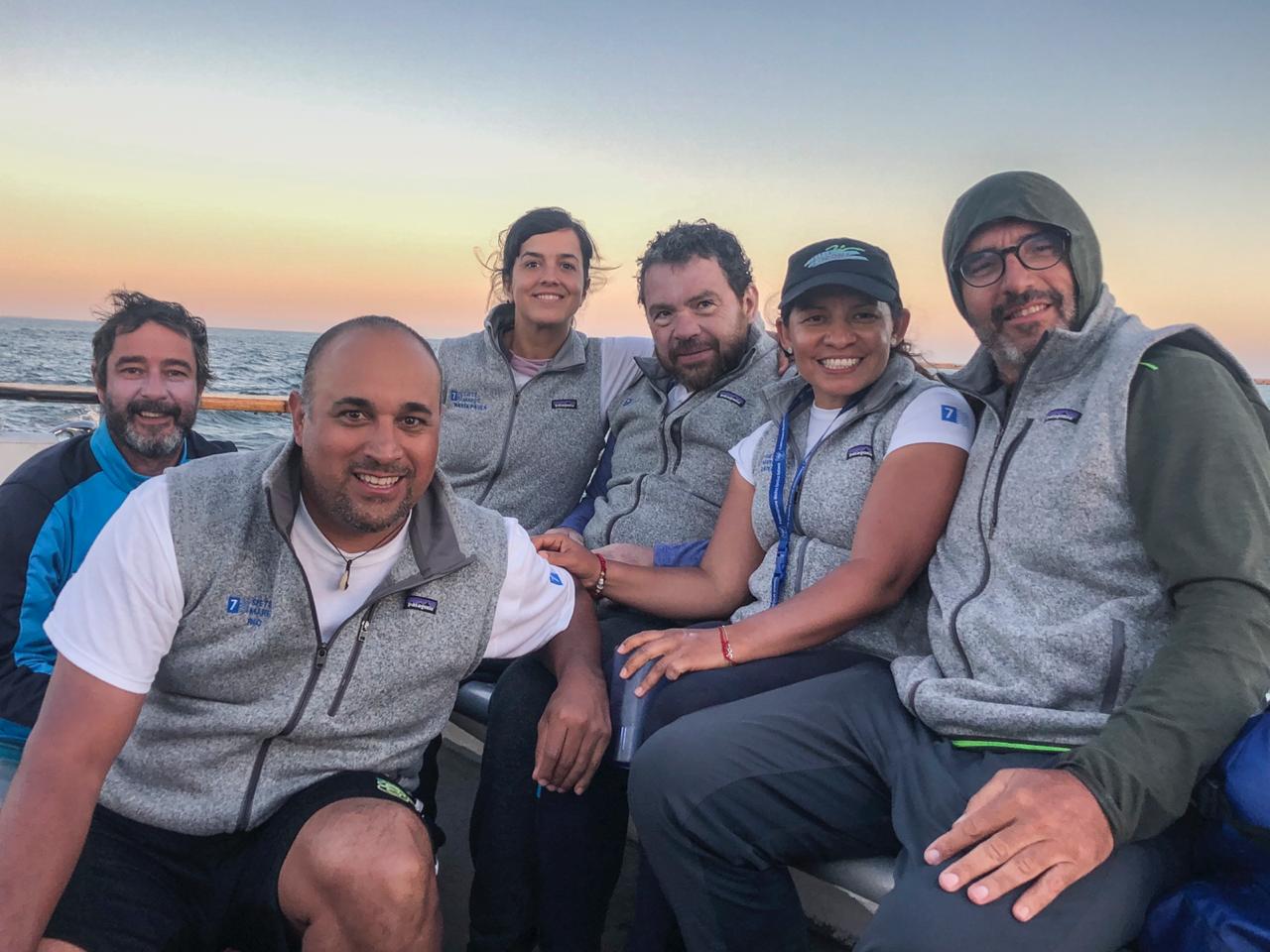 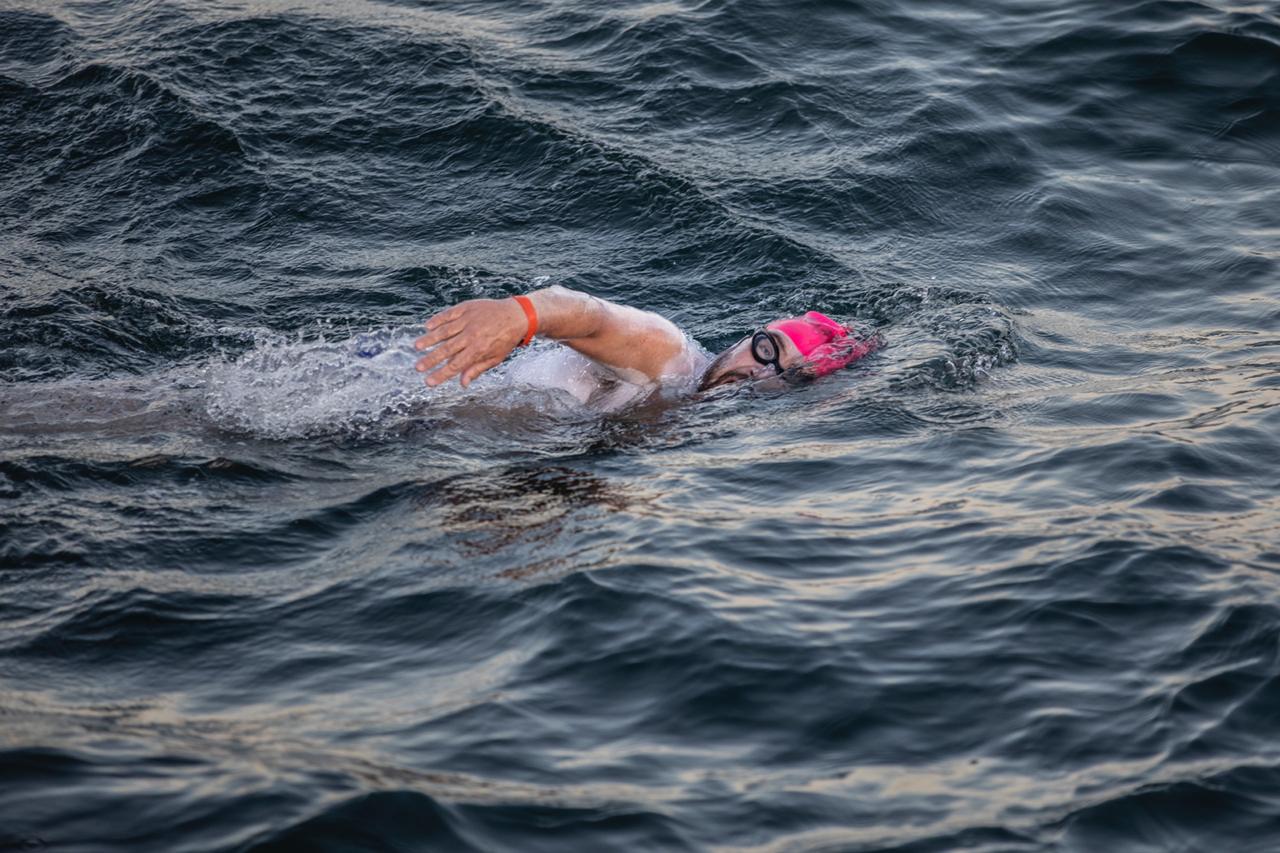 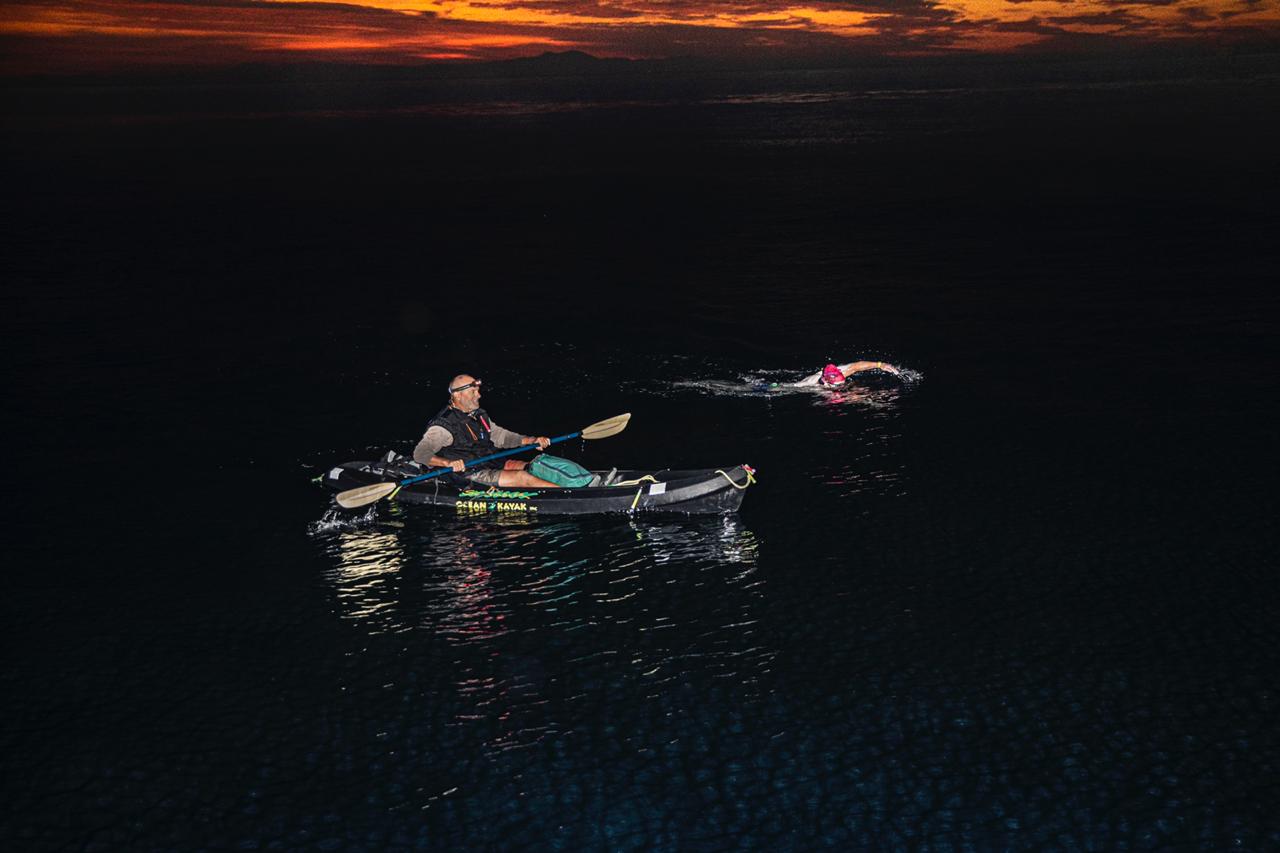 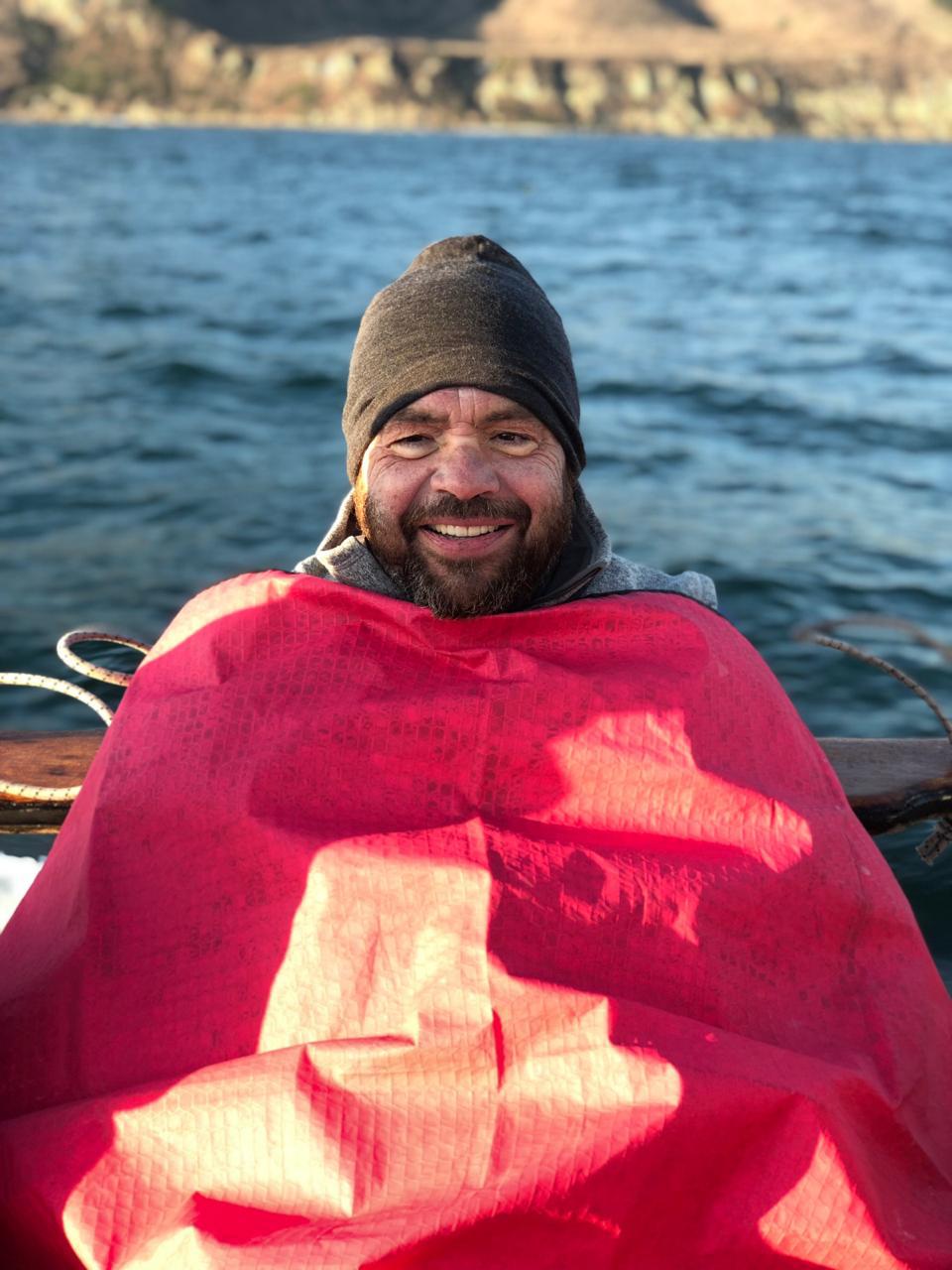