I still remember my first classes when I was in elementary school: it was a long list of what not do. I lived under the constant threat of being expelled.

When I started swimming, school worries became secondary, while every season got me to achieve new goals. Swimming made me feel good. It gave me direction. Since then, in college and now in my professional life, I have always had a list of what I hope to accomplish.

So a week ago I kicked off my 2017 swimming season and with it, another list of goals: Catalina in January, Cook in March and the North Channel in August.

I already have plane tickets for Cook and the North Channel, and have told my partners and customers not to plan on working with me during those times. All I have left is to book the hotels.

We still have to see about Catalina. I have to get the swimming association to agree to certify me.

In addition to my macro goals the list includes some micro targets, which are also essential. Getting acclimated to cold water comes first, followed by increasing my swimming speed and strength, and improving my technique.

I share responsibility for the last three with Nora, Rafa and Ricardo. Each of them will have to train me. Acclimation, however, depends on me.

Over the next ten months I will try to swim at least once a month in water that is 15º C (59º F) or less. I will look for opportunities each week to swim in pools without heating.

People who live in Mexico City do not really understand unheated pools. One of the side benefits of living three days a week in Hermosillo, however, is that they do have them there, and they’re outdoors. One of my goals is to be permitted to swim in them all winter.

There is also a beach very near Hermosillo, Kino Bay, where 3 weeks ago I swam with Rafa Alvarez, his wife Paula and their son Guille.

We arrived at 6 in the morning as the sun was beginning to rise. When I’d asked my network about Kino Bay, they told me I had to go to the beach where the palapas were.

But the beautiful landscape of a calm sea with an island in the background contrasted with the dirty beach, where a people, most of them young, were still drinking as they finished off a night of partying.

Taking advantage of the fact that I had to work in Hermosillo that weekend, I wanted to make the journey to Kino to find out if the space could serve us in the coming months. The water was very warm in late September, but the journey was short and pleasant 6 kilometers. And all we’ll need is a kayak to follow us; the waters there are traditionally navigated by small, flat-bottomed pangas.

Right at the beginning of my season I wanted to swim in cold water so this weekend I went to San Francisco.

Unlike last season, I’ve hoped to swim twice a day while visiting San Francisco. I arrived Friday at 6am, full of enthusiasm. It was totally dark and did not bring a flashlight or headlamp, so I decided to get together with someone who had brought one. Little by little the swimmers began to gather on the beach. First came all the men from the South End Rowing Club, and then the women of the Dolphin Club arrived. I hadn’t noticed, but that’s the independent sort of dynamic when both clubs are mixed.

I asked Simon Dominguez if we were going to head to Fort Mason. “I don’t know, he replied, “let’s see.” Then I put the same question to Cameron Bellamy, but he was busy showing his Australian friends around. Kimberly Chambers couldn’t answer when she showed up, either. To my surprise, nobody was clear as to what we would do. And when I asked Kimberly if we swam for two hours on Saturdays gave me a “Huh?” face. I was definitely on another schedule!

When we started to swim, since I couldn’t see anything, I joined Cameron Bellamy and his friends. Halfway through the swim, when the sun had started to come up, I said goodbye and turned to my training.

Later I went back and put in another hour among a crowd of observers who were in Aquatic Park to see the Blue Angels and other planes in the Fleet Week air show.

On Saturday I put in 2 hours in the first training session. Thanks to the support of Miguel Melendez and his friend Lilo I had company throughout my swimming.

The water was perfect, 15.1ºC like the previous day. We left the cove and headed over to Pier 41. On arriving at Fort Mason, we went back through the tunnels and along the inner wall to complete our 2 hours.

Later I returned for my second session. As it had on Friday, the average age of the swimmers had changed. In the early morning they’re under 60, while after 11 am the over-60 crowd arrives. I imagine it has to do with the latter not having to worry about going to the office.

One of the rituals of swimming in the bay is having a sauna after getting out of the water. You recover your body temperature while chatting about everything and nothing. Saturday I met Randy, a 92-year-old man who had just played two sets of team handball and gotten in a 10-minute swim. We talked a while, and I was really impressed with its vitality and enthusiasm. He told me that it was thanks to these kinds of activities at the club that he had lived so many years.

After leaving the South End Rowing Club I sat for a while to watch the air show. I was lucky to see an F-22 Raptor, the US Air Force’s most advanced fighter jet. Its speed and maneuverability are impressive: at one point it seemed as if the plane was dancing.

Then, as I headed back to the parking lot, I thought about the contrasts between swimming in Kino Bay and San Francisco.

At Kino I couldn’t find anyone swimming. Moreover, we left some of the wasted kids shocked when we told them we had gone to the island and back.

In SF, we were 40-strong on the beach at dawn, and all day you could see people of all ages swimming, even someone who was 92 years old.

This was in the back of my mind during the plane ride back to Mexico. Only a country that is an empire, with a culture based on merit, can develop a society where those who want to can remain physically active at 92. 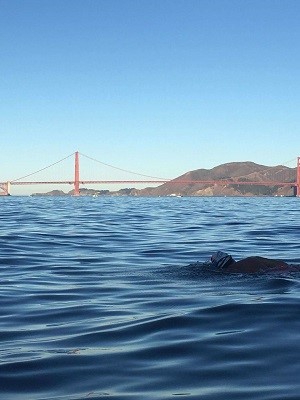 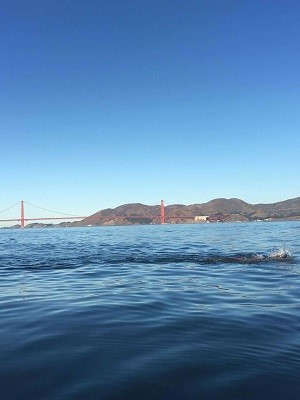 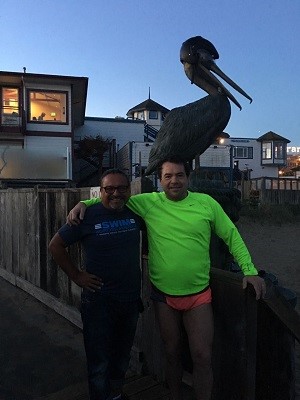 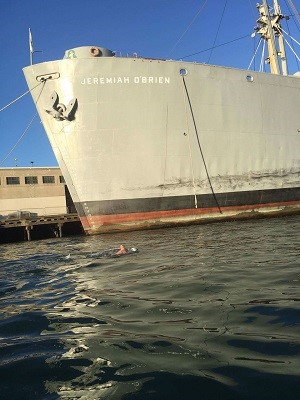