A day with no major incidents.

The biggest surprise was breakfast, in fact. For some reason we were served boiled eggs with sausage. No one had asked for it, but I imagine the chef wanted to make us feel good. I never imagined that I would actually miss my Japanese breakfast. Yet we all agree that we now prefer fish, rice and soup. Fortunately, William was able to tell the staff that we do not want changes to our diet.

The wind is still blowing hard: 26 knots on average, with gusts up to 38 knots. Fortunately the 15th and 16th look good, according to the forecast.

Still, we decided to go to our beach to swim for 90 minutes. This is an area relatively sheltered from the wind. It is our fourth visit; Nora and I already have the route plotted out. The way out of the protected area is complicated, with many rocks and shallows. Once outside the barrier it is easier to swim. There are still quite a few rocks, but now we know where we’re going. Today we were plagued by wind and waves, but enjoyed greater marine life. We came across many fish and even a small stingray.

Before going swimming, Nora and I had to assume medical responsibilities in the absence of our team physician, Dr. Ariadna del Villar.

Ariadna has traveled with us the to all swims of my Triple Crown, as well as many of my workouts. In addition to providing me with medical care, she gives me follow-up blood work. As she had just given birth to her first child three and a half months ago, she was unable to join us. We had been more than willing to bring the two of them, but it would have been too much for them.

The first day that we swam we were stung by small jellyfish. It hurt me a little at the time, but I had no reaction afterwards. Nora was not as lucky; she had strong reaction that prevented her from sleeping at night. I had to prescribe her an antihistamine from the medicine box we brought. I really felt Ari’s absence…

Nora, in return, attached my shoulder harness to lower my pain. Before leaving Mexico she took classes with Radamés, who had been treating the shoulder there. She even he brought his notes and photographs. After a painful learning curve and a number of adjustments, my shoulder was ready to face the waves. It was well worth the 30 minutes it took us.

When we finished, we decided to check out a restaurant in the train station, 22 km away. This was our big day trip, and we were looking forward to trying the grilled meat that had been recommended by Daniel and his team.

No luck with the meat. They didn’t have half the dishes on the menu and we had to settle for substitutes. All dishes were rich, but, inevitably, were served on a base of rice.

The restaurant is part of a gift shop for travelers, offering everything from from seafood to fruit, olive oil, toys and sake. Among my purposes for the trip—albeit quite a secondary one—was to learn to drink sake. I want to distinguish between all the different types and be able to order with some knowledge in a restaurant.

As the saying goes, trips broaden your horizons. Me, I’m broadening my own. 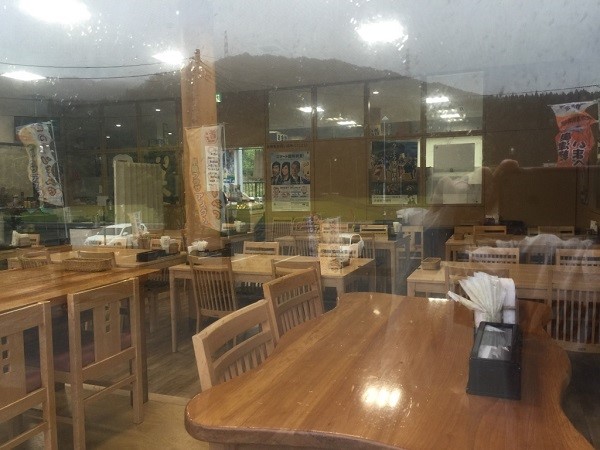