June 9, 2017. Last Tuesday I gave a TEDx talk at the German College Alexander von Humboldt. I wrote this text to have a guide of what I was going to say because I had 16 minutes to do it. The talk began with the presentation of the Catalina 2017 video.

Against the recommendations of my coaches, friends and open water experts, on January 15 I became only the fourth person in 90 years, since the first crossing of the Catalina Channel, to do it in January.

No one understood why, without being required to, I put that challenge in my 2017 swim schedule.

I currently have a project to complete: the Oceans Seven. This open-water challenge, the equivalent of the Seven Summits of mountaineering, consists of swimming the English, Catalina, Moloka’i and North Channels, and the straits of Gibraltar, Tsugaru and Cook. To date only six people in the world have succeeded in accomplishing it.

I have only one to go—the North Channel, which from my perspective is the most difficult. If I succeed, I will be the seventh person to complete the Oceans Seven.

Open water training is similar to preparation for any other extreme sport. It takes a lot of discipline to swim six days a week, sometimes to 8 hours at a time. Plus I do strength exercises 3 times a week, as well as mental training.

Today, appropriately, I want to talk about the motivational exercise that I do to achieve my swimming goals.

I start from the basis that we all have stumbling blocks in life and that the most important thing is to overcome them. For many years of my life I swam literally a thousand miles with the sole intention of being able to participate in an Olympic Games. I never did it.

Like you, I studied at the Colegio Alemán Alexander von Humboldt, then at the Colegio Suizo de México, at a high school in California, and at Stanford University. I was never the best in my class.

In my life as a public servant I have managed to make important changes in the places where I worked, but I never became Secretary of State.

At the age of 14 I founded my first company and over time I started six more—two of them, Asdeporte and NET, very prominent ones. I have never become a millionaire, however, and I continue to work every day with the same enthusiasm that I did 43 years ago.

I realized that the experience of stumbling along the way has always been accompanied by something my father told me as a child after I asked him why astronauts went up in rockets knowing that they could die.

On January 27, 1967, three astronauts from NASA’s Apollo Program were burned to death inside their space capsule during a pre-launch test.

I remember that we were in the car and we heard the news. When I asked him about it he answered: “They were looking for success, they wanted to do something special and they failed in their attempt. Never fear failure, fear mediocrity.”

From that day on, those were the words that have defined my journey through the world: not to fear failure—only mediocrity.

That fear of mediocrity drives me to ask myself constantly whether I am doing everything I need to achieve my goal.

In the original calendar for my Oceans Seven campaign, the North Channel was scheduled for the summer of 2016, after the Moloka’i swim.

Recovering from Moloka’i took me just over a month and, because of professional commitments, I was not able to fly to San Francisco to train until the beginning of July.

The water was not so cold, probably about 15ºC (59ºF), yet I felt very bad. At the end of my six-hour training swim I was dead. There was no way I was going to be able to endure 14 hours at lower temperatures. I knew that if I continued with my plan to go to Ireland in early August to cross the Northern Channel, I would fail.

Communicating the news to my team and family was not easy. They could not believe that I was going to change a swim I’d had on my calendar for three years. The decision was in no way typical of me.

But this time I had to accept that I was not prepared, and that I was going to have to work intensely to overcome the fear I had of cold water.

Accepting that you cannot have everything and that you have limitationsis part of the internal work that I do. Without it, I would have crashed into many more walls than I have.

Recognizing that you cannotis not easy. You heard what they said about me: National Sports Award, member of the Open Water Swimming Hall of Fame, the best open water swimmer of 2015…and yet every time I attempt an ocean crossing I’m scared, and sometimes I know I cannot, or that is not the best time to try.

There is nothing wrong with feeling afraid and saying “I cannot,” as long as you have done everything you can to know if you’ll be able to overcome fear and obstacles in your way.

In August I came up the idea of going to San Francisco for four days every month. Each month the water temperature went down, yet I managed to swim the same distance without any problems. When the temperature dropped to 11.5ºC (less than 53ºF), I had to reduce the distance, but not the hours I spent in the water.

Watching my progress was encouraging, but it did not convince me. With water at 14 / 15ºC, as it is in the Canal del Norte, swimming 6 hours is not the same as 14. There had to be something else he could do to make sure I could hold up for the crossing.

Among my options, the simplest in terms of logistics was to attempt to cross the Catalina Channel in January, despite the fact that one of my most memorable failures had occurred in precisely those waters.

The Catalina crossing and I have a special relationship. Throughout my sporting career—which includes 10 marathons, 5 Ironmans and all my open-water crossings—Catalina is the only event I’ve had to suspend before reaching my goal. Although I have managed to complete the crossing three times, to try it in January, when only three people before me have been able to make the winter crossing, was to accept the possibility that I could fail.

A solo swim is the least solo thing there is. You need a big, multidisciplinary team and a family that supports you—and it’s not always easy to maintain unity across the wide diversity of opinions in the group.

Announcing my plans triggered the comments I was expecting. “You’re crazy, why do you want to try that?” “It’s almost impossible!” “You’re going to put Cook at risk. You will have only a few weeks to recover…” “You have such enviable record—why risk failing?” “Entries to try the crossing begin in April; the Association will not let you go,” etc.

Let me leave you with another thought.Be ambitious with the goals you set and do not let anyone put limits on your dreams or tell you that something is impossible.

The first week of January I arrived in San Francisco with the goal of swimming in the Bay every day for eight days in a row. The water was 10 degrees—50º Farenheit.

The first day the goal was to reach 60 minutes. After just three minutes I had to stop to rub my ears and catch my breath. I stayed a short distance from the beach and at 45 minutes I started to get dizzy. I panicked and headed for the beach. I could not get up. I had stopped the clock at 48 minutes. I walked back to the club, but to get all the way there I had to get back into the water.

When I finally hauled myself out and threw myself on the dock. I could not get up, and trembled without stopping. Simon Dominguez, a friend of mine at the South End Rowing Club, told me: “Don’t worry, you’re not going to die. It will hurt for a while, but you will see that it will help you. ”

Already recovered, I realized that, in addition to the cold, I now had to control the panic of fainting in the water.

Consulting the brain trust of my team was beyond all possibility. I did not want any more lessons that this wasn’t the right thing to do in the first place.

The other option was to accept again that I could not do this, and consult with someone else in the open water world. I puffed myself up with courage and wrote to a friend telling him what had happened.

He told me: “The ability to bear the pain in the cold will increase, but you have to be aware that it will never disappear. Train your mind to withstand it. As your body cools and you realize it, relax. As soon as you begin to feel damage, do not panic. Find out how to relax and continue. However, if your body simply cannot stand the cold, you will get hypothermia. Get out immediately. And come back another day. ”

With these tips I continued swimming in the following days and arrived January 14 at the port of Long Beach.

Before leaving we seemed to have a party on the boat. The royalty of the of Southern California open water swimming community was present, including four members of the Hall of Fame and five swimmers who had completed the Triple Crown. There was no doubt that the expectations were very high.

For my part I was clear that I was on a threshold of my career as a swimmer. Whatever happened that night was going to be definitive in achieving my goal of being the seventh person in the world and the first Mexican to achieve the Oceans Seven, in addition to being the first Mexican to complete four of the crossings. I was filled with great emotion.

Every time I see the video of the crossing, the same thing happens to me: I cannot help but control my breathing when I see myself jump off the boat. I remember the feeling of tranquility when I entered the water.

I knew that during the night the waves would be very high, but there was the chance that at dawn they would diminish and the sun would shine. When dawn came, though, the waves did not come down and the sun did not come out. It is what it is. As in life, there are days with high tides and days without sun. But the important thing is not to let that get you down. Adversities can be viewed as salt and pepper; they are the background that makes the journey interesting.

When I finally reached the shore and got up, I felt the peace of knowing that although I respected the cold of the water, I was no longer afraid of it; I realized that I still have the capacity not to fear failure. Something very beautiful to me was that, once again, I would not have to explain my swim to anybody. It’s comforting when you know that success does not need explanation. 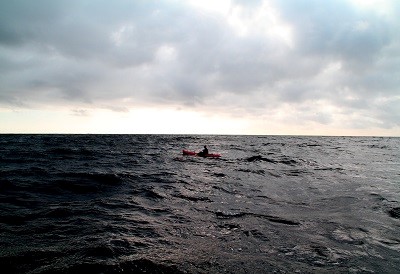 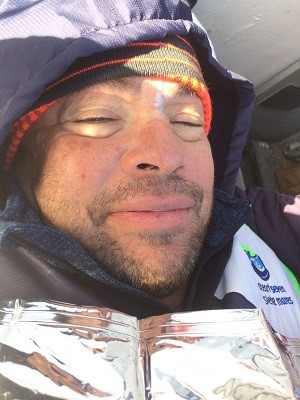