From my first conversation with Quinton Nelson, the captain of my guide boat, the chemistry flowed.

We agreed to meet on the first day of the swim window to assess our possibilities.

Once the introductions had been made, Quinton, a man of few words, got right to the point.

“I don’t see anything from here to Tuesday. We’ll talk Monday evening at 6:00 p.m. and I’ll tell you then if we can get out there.”

With effort I dragged a few more words out of him about the route and his strategy for the swim. I also asked him three specific questions to make sure that I could swim on the left side and take video with the drone, and that I would be swimming the first 2 hours with hourly feedings. The goal was to arrive midpoint of the journey before six hours had elapsed.

We were out of his office in less than 15 minutes. On the way to the hotel Lucia and I agreed that he was someone who inspired confidence. She would have peace of mind knowing I would be in good hands, and I would have a sailor who knew the North Channel like the back of his hand.

Monday arrived and weather conditions did not convince Quinton. The early hours of Tuesday looked great for the swim, but by afternoon the wind and waves kicked up and it started to fall apart.

“There’s a lot of pressure on this. There is nothing better looking forward, but I am not convinced that the weather will be stable in the afternoon. And yet it would be terrible if you returned to Mexico without being able to attempt the swim. ”

I told him not to worry about that, just to give me his opinion in all candor.

We agreed to talk the next day because I saw that there might be possibilities on Wednesday.

On Tuesday we got up to train at 4:00 in the morning, and the day was beautiful. We learned that a South African swimmer had left on his crossing, and on our post-swim walk we all wanted to touch the subject without daring to mention it.

“Let’s not assume anything, there are many hours to go on his swim. I trust us to make the best decision. ”

Hours later we would find out that they had to take him out of the water and send him to the hospital with hypothermia.

At the beginning of my Oceans Seven project, I had had a long talk with Jaime Delgado, my mental coach, about the way I faced my swimming.

“You have to stop doing the swims out of sheer desire and strength. You need to take a mental approach,” Jaime told me. As soon as I returned from Gibraltar, we focused on to achieving total relaxation as I was swimming and to face each crossing based on how I used my body’s energy—not just muscling through it with sheer strength.

Late Tuesday we held the ceremony where we poured the waters of Las Estacas and San Francisco Bay into the North Sea. It was a very precious moment in which I asked the ocean to let me cross.

That afternoon Quinton decided that we would not go on Wednesday, but that Thursday we would have a chance. Thursday was also the last day of our window.

He arrived at Pier 36 on Wednesday and we met again. “I feel very sorry about this, but right now I’m not seeing the conditions. If you are willing to take the risk, we’ll see you tomorrow at 7:00 in the morning and decide. The weather can change. ”

I had dinner early and at 8.30 pm I had fallen asleep, convinced that the next morning I was going to get into the water.

I usually wake up on my own, but as a precaution I set the alarm. Happily, I slept soundly until 5:00, untormented by dreams about the possibility of swimming.

Coffee in hand, I left the hostel for a walk. The New York Times photographer appeared in the grey predawn light. We waved to him and told him that the team would leave at 6:15.

The streets were damp from rain the night before, and the sky was still completely closed up. I made my mind up to ask for at least 6 hours of swimming if Quinton told me that the conditions wouldn’t make the crossing possible. I absorb the taste of the North Channel waters with my body and mind, and take it back to Mexico with me if I had to return.

At 6:20 I started my stretching routine. Whatever happened that day, I would swim.

We were finished when Quinton showed up.

“The situation is very difficult,” he said. “The weather is now very bad but in 3 or 4 hours there are reports that it will improve. You have the last word.” He looked at me.

“Do you trust that it will improve?”

I extended my arm, shook hands and said, “We have a deal—we are going to Scotland.”

At that moment we sealed a pact, one that extended to mutual respect and I would say even friendship. We were going for the treasure of Don Julián.

The next few minutes ran in slow motion.

We arrived at the marina, where I said goodbye to Lucia, Ximena and Brad and then the boat left the dock for the starting point. After Ariadna and Nora gave me my final preparations, I jumped into the water to swim to the rocks that were pointed out to me.

Before starting I check the water temperature. 13.3º Celsius—almost 56º Farenheit. Pretty warm, if you consider that it’s been 12.7º or 12.8º in my training swims over the last week.

They give the exit sign. I feel strong. My first thoughts return to the offering I’d made.

I greet the sea and ask it to let me swim, explaining that this is an intimate moment between us, without anyone watching or tracking us.

The first hours are slow at 60 strokes per minute, but the feedings go very well.

The sky begins to clear, the temperature rises. I’m able to be more relaxed as I swim. I increase my rate to 64 strokes, and at 5:00 PM we are already halfway there. I’m excited when my team lets me know—I’ve shaved one hour off my expected time.

During the feeding they tell me that we are going to approach the coast and that in just two hours we will have arrived.

It’s great news, but as I start to swim again I feel the currents pushing against me. At my next stop to eat the team gives me the news.

“The currents have changed, now they running the wrong way—against you. You have to make the most of the next few hours.”

The mercurial nature of the channel surprises me, but I do not ask questions or argue with them. I’ve done well by keeping my focus on the swim. I’m not going to fail in this one, difficult moment.

There’s an expression: “Maximum effort is relative.” It’s not the same when you do it in a race or a training session.

The way that translates into open water swimming is doing more strokes per minute without increasing your heart rate, much less accumulating lactic acid.

So I transmit the signal to the brain and maintain a rate between 67 and 68 strokes per minute for the next hour. We do not make any forward progress. Yet my team continues to ask for the same output.

During the next feeding (after 11.5 hours of swimming) they tell me that I have managed to pass the current—but that I still have to swim to the coast.

Immediately, a snippet of conversation from my first encounter with Quinton comes to mind.

“The hardest thing is to actually get to Scotland. Many swims have been suspended meters from the coast. You never know when the currents will be against you again.”

My body is telling me that it’s time to finish the swim. It’s going to take me a half-hour to recharge my energy, and I calculate that I might have to swim for 15 hours.

I start my Qi Gong routine. Absorbing the energy of the water and the whole cosmos into my body, I stretch my tendons. I relax. I turn to look at the boat and Nora tells me that in 4 minutes I get a feeding…so I’ve been lost for 26 minutes, completely absorbed in my own process. I count until 1 to 200 and then stop. I drink my carbohydrates with protein, and continue swimming.

Little by little I see the coast approaching. I’ve brought a special flag to celebrate the completion of the swim, and they ask me when I want it passed to me. After a while, when it’s obvious that I’m going to finish the crossing, we stop.

“Quinton says we not to give you the flag: You have to swim to those rocks.”

I remove my goggles to clearly identify “those rocks,” and see a craggy, jagged, 180-degree panorama of them.

I swim to the rock that seems most friendly. I approach and confirm what I’d guessed at first glance: it’s going to be very difficult to stop. A first wave rolls over me, I hold my hands out but my feet and legs are caught and the current turns me. Now I am in the worst of positions, with the waves in front of me and rocks to my back. I see the next wave coming at me. Adrenaline now flooding through my body, I instinctively stick my arms out behind me, contract my abdomen and tightly tuck my beard to my chest. I’ve got to keep my head from being smashed into the rough stone. The force of the water carries me to a rock and I raise my hand, knowing that I only have a few seconds to be seen by the boat. They signal the end of the swim and I immediately lay back in the water to start swimming to the boat.

I was never able to plant my flag or find the treasure.

In exchange, however, the sea gave me the opportunity to cross it and to fulfill my desire to swim all Seven Seas of the Oceans Seven. 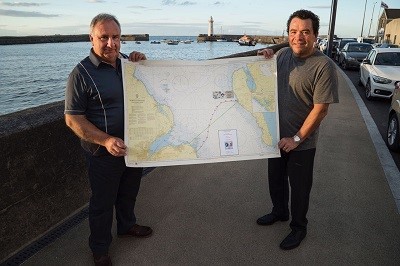 With Quinton Nelson, holding the map of the swim 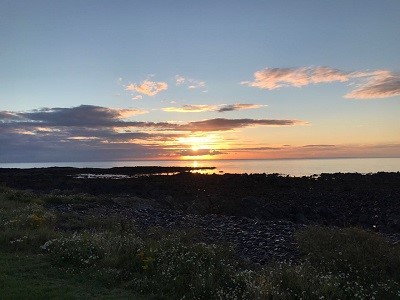 Next day at the starting point 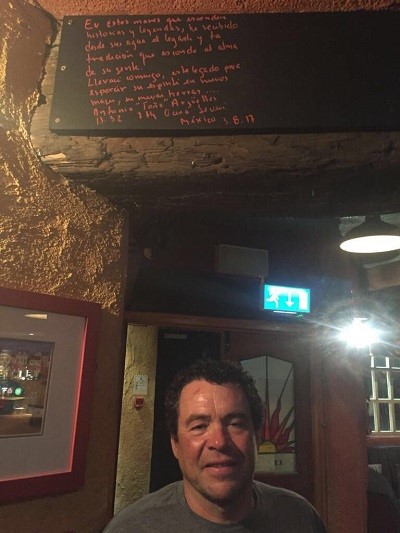 With my inscription at Pier 36 wall. 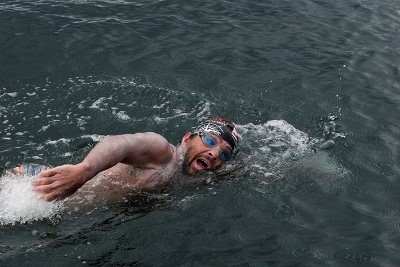 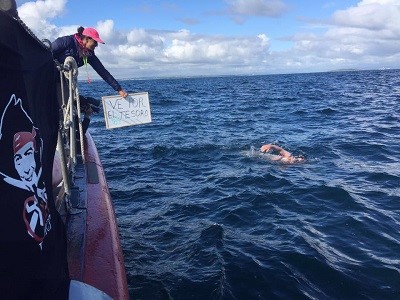 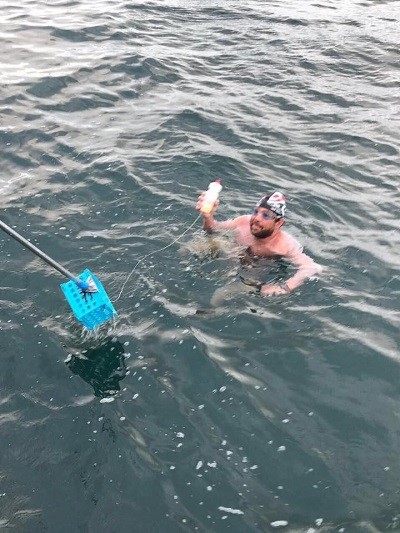 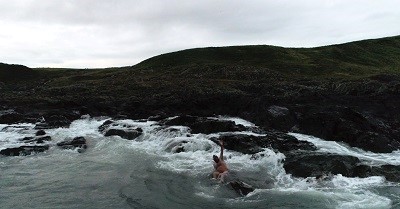