On cheering and other things

To an extraordinary daughter from a very proud dad

Soon, two months will have passed since my double crossing of the Catalina Channel. In the days that followed the swim, I adhered to a rule devised by my coach, Rafa, that I have learned to follow: one day of rest for every hour spent in the water. I began this active recovery period with stretching exercises and gradually incorporated low-intensity aerobic exercises as well.

On September 23rd, the training process for my attempt to complete a double crossing of the English Channel in 2020 officially began. However, the most relevant part of these first four weeks has not been my training, but my participation in the Chicago Marathon as a supporting spectator.

A few months ago, after completing the San Diego Half Marathon, my daughter Ximena decided that she would set aside the 21.1km and go for the full event. We checked the calendar, and since this was a first for her, we decided that Chicago would be our next destination. Unlike other occasions, we did not get the chance to train together often. She had to run long distances in Toluca, while I had my own work to do in the water.

The day of the trip arrived, and as we were waiting in line at the airport, I began to feel weird. I didn’t know exactly what was going on, but something kept perturbing me. Finally, when we left the airport and got into the taxi, I realized that this strange feeling was related to the fact that it was the first time I attended a marathon as a spectator. When I got in the car, I shared my thought with Ximena. “It’s about time, Dad. In how many Ironman races, marathons and swims have I supported you?” She was right: she had accompanied me many times.

The trip we remember most fondly is the one we made when I participated in the Panama City Ironman; Ximena was 11 or 12 years old. On the day of the event I handed her a note with my possible lap times and told her to be on the lookout so she could see me every time I passed. I told her something like “see you in eleven hours; help out in the finish line and stay alert to see me.”

This time I offered to run the last ten kilometers alongside Ximena to give her encouragement during this crucial part of the race.

On Friday afternoon I ran into Juan Luis Barrios, who was in Chicago as a TV commentator. He agreed to talk to Ximena, and so we met him on Saturday before dinner. I was very pleased to see one of the greatest long-distance runners sharing his wisdom with her.

After asking what her expected time was, he said: “The first five kilometers are very important. Do not go all out; instead, try to save energy for the second half of the run. You will be tired when you reach the 32km mark, but at this point you will see your dad. Both of you must be patient.” Then he gave her a final word of advice: “Enjoy your run very much.”

The next morning, I accompanied her to the start line and stayed until she took off. I tracked her position through an app and estimated the moment in which she would reach the 32km mark. I got there using public transportation and waited for her for about 25 minutes.

During the wait I stretched, made some chi kung movements, and warmed up my muscles. I was ready to receive Ximena. As Juan Luis had said, she would surely be tired and in a bad mood, so I wanted to do everything in my power to avoid being a nuisance.

I saw her from a distance, about 300 meters from where I was standing. I got ready and started jogging when she was 10 meters away. As soon as we were next to each other, I turned to see her face. Instead of finding a countenance of suffering, I saw a smile from mouth to mouth. “I feel great,” she said. “Let’s continue three more miles at this speed and see what happens in the last three miles.”

At this pace, I was looking at a one-hour-and-twenty-minute run. At 40 minutes I started feeling the rigor; I had not run for months and my hamstrings started to hurt. I was struggling.

Then, out of nowhere, I found myself on the ground. I had tripped over a plastic bag full of water bottles that a gust of wind had left in the middle of the course. Fortunately, the judo skills stored deep in my brain helped me avoid a disastrous fall. It took me a few seconds to get up—I felt a strong pain in my arm—but I checked and apparently everything was in its right place. We kept going and I noticed that I was feeling better, probably as a result of the adrenaline shock; I appreciated the natural doping.

As we reached the 38km mark, Ximena began pushing harder and rose the pace to 6:00-6:15 minutes per kilometer. It was rough, but I couldn’t stop supporting her. With about 100m left, she sprinted. My legs were no longer responding, so she reached the finish line before me. I felt nothing but pride: my daughter had finished her first marathon. I hugged and kissed her as she said with a smile: “Dad, I want to run another marathon.”

To celebrate her feat, that evening we had dinner with Juan Luis. I listened as they planned Ximena’s next adventure, and just made a mental note to tell Rafa that we needed to include some running in my training program. I don’t want to cross the finish line five minutes after Ximena in her next marathon. 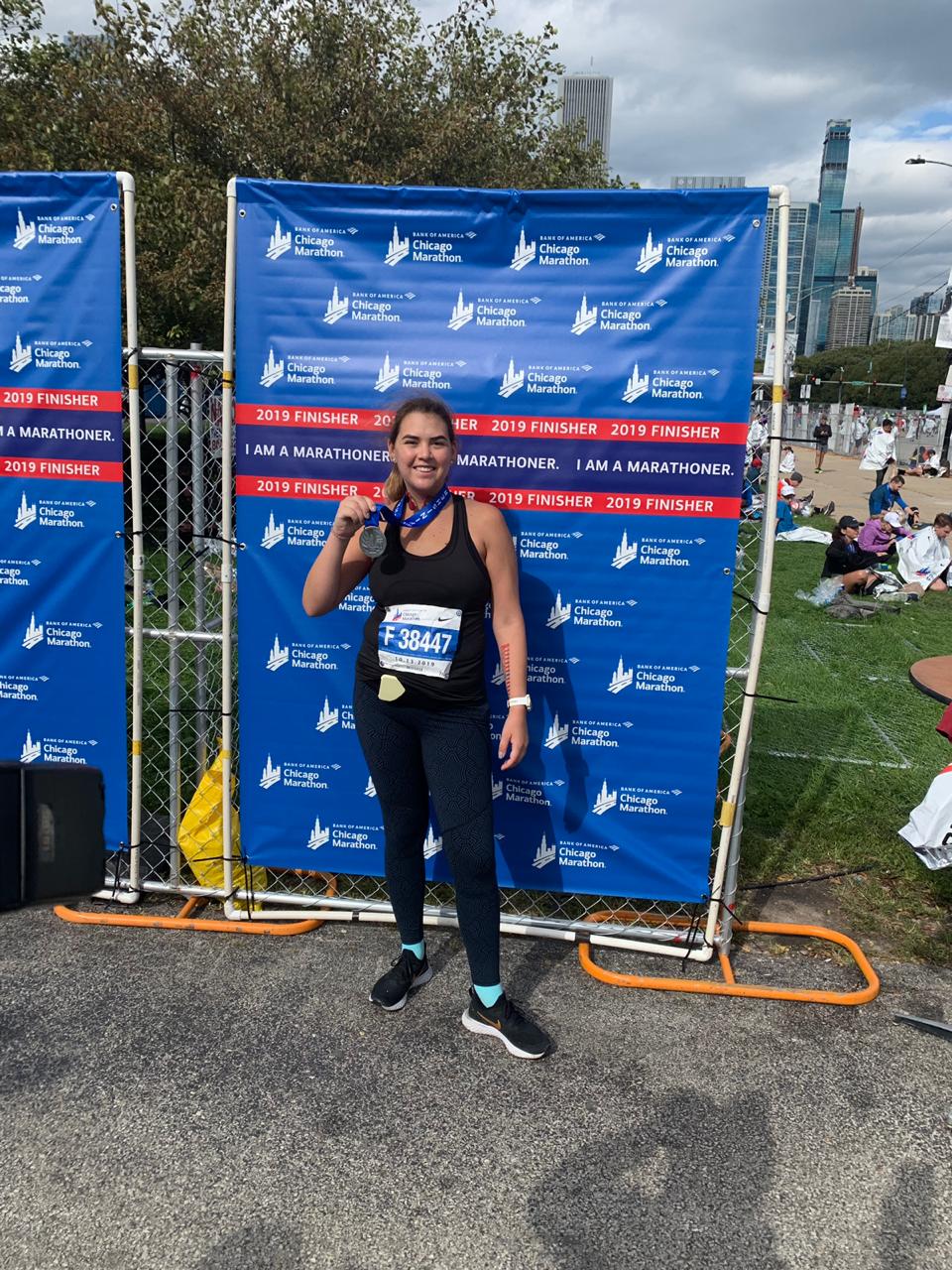 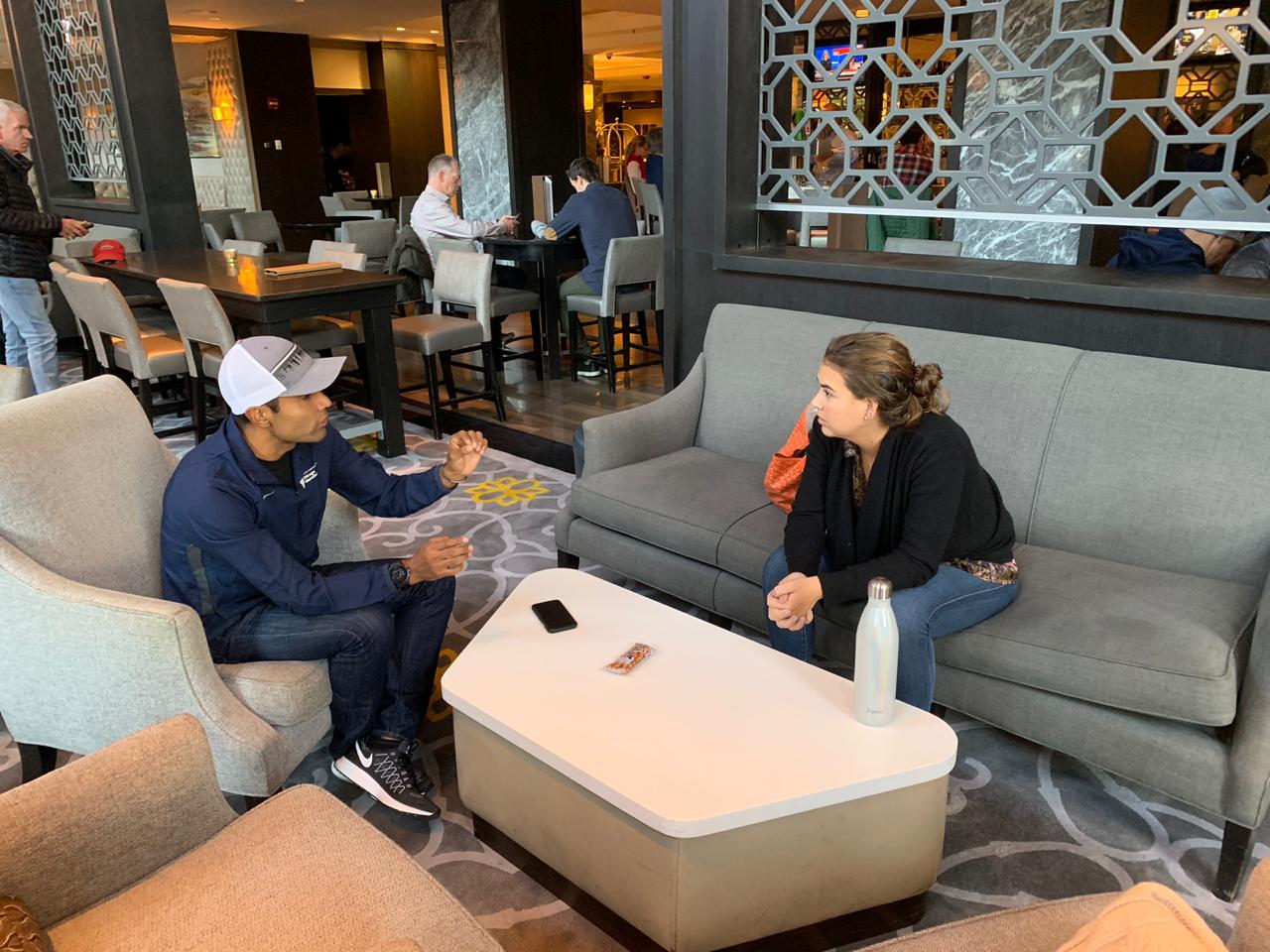 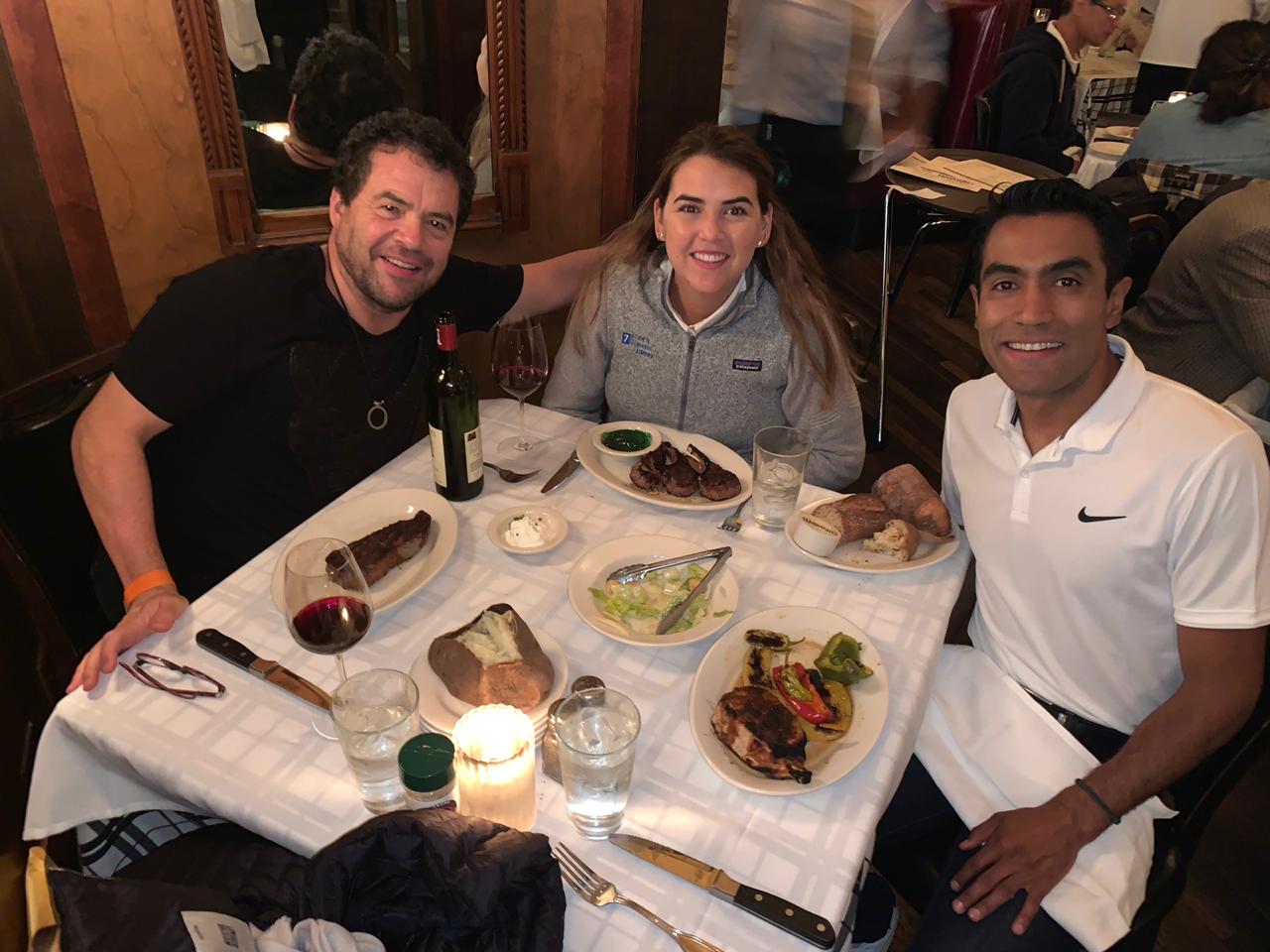 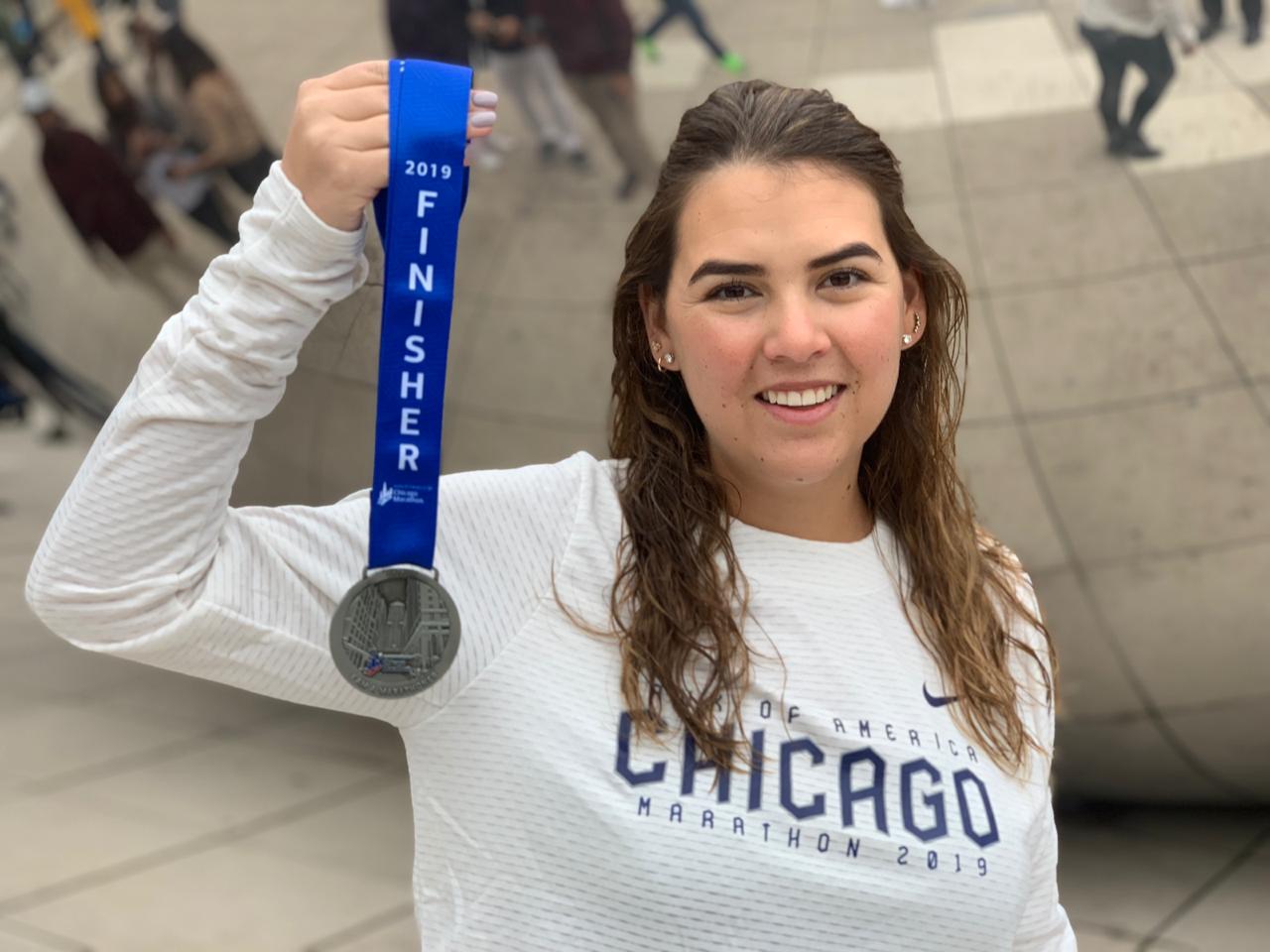 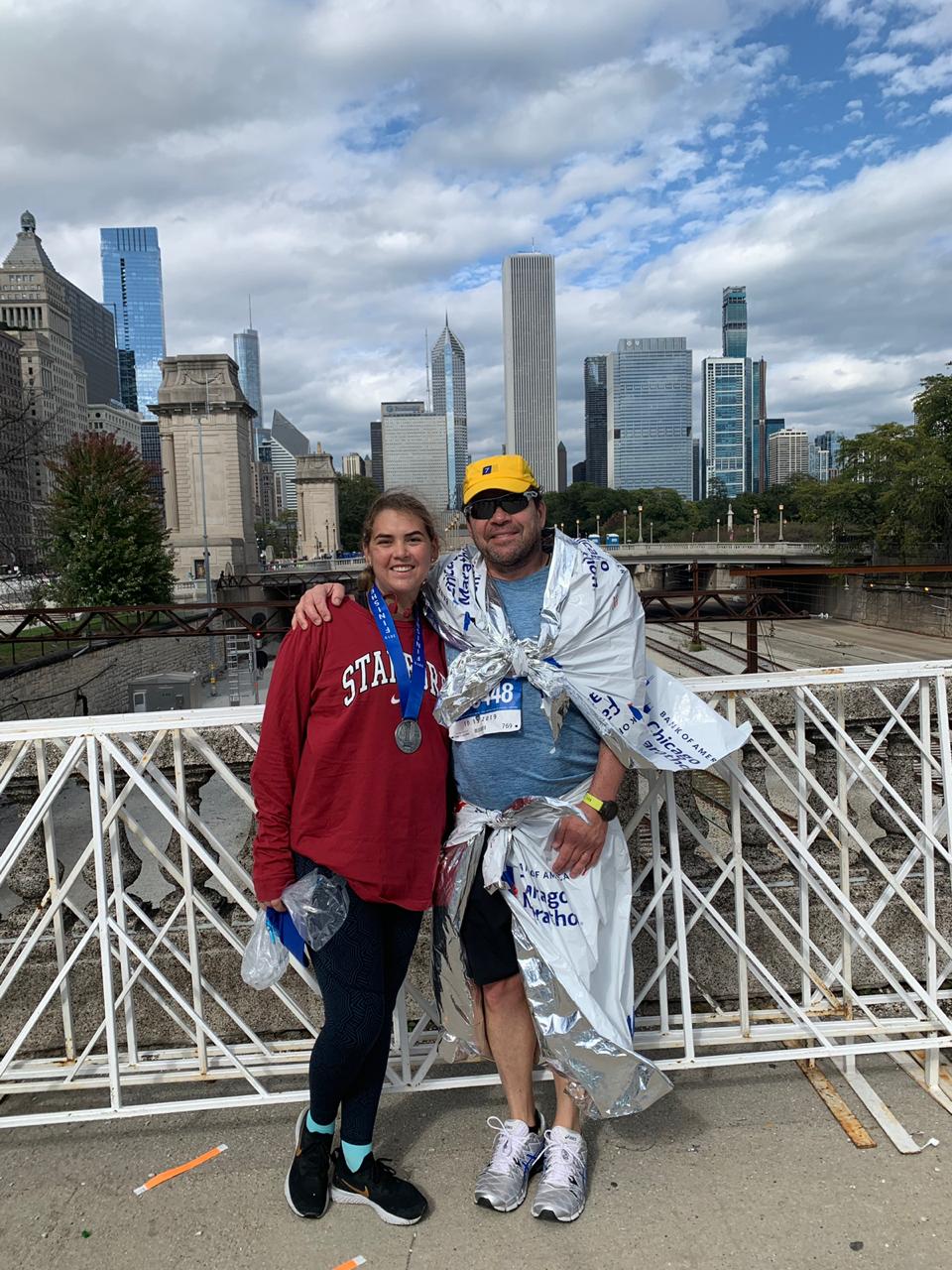 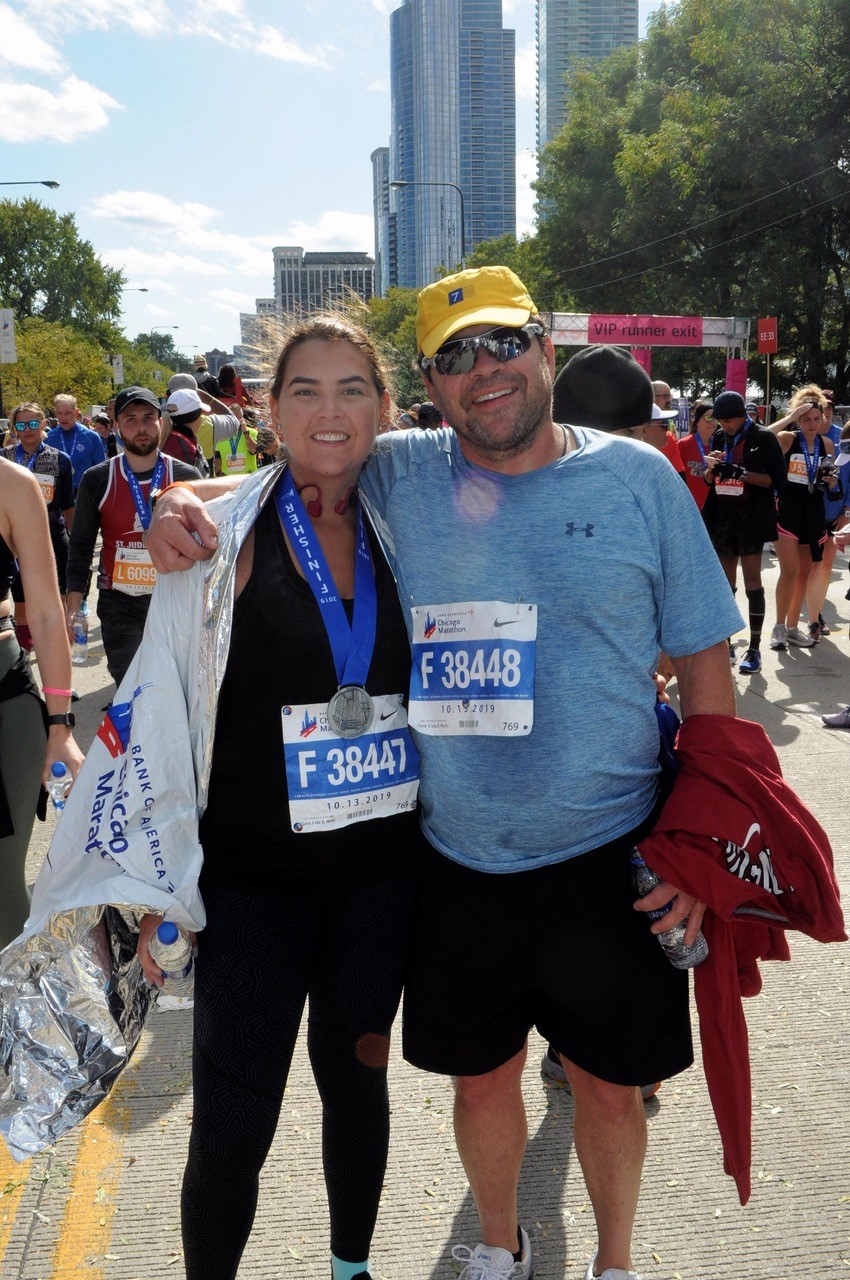 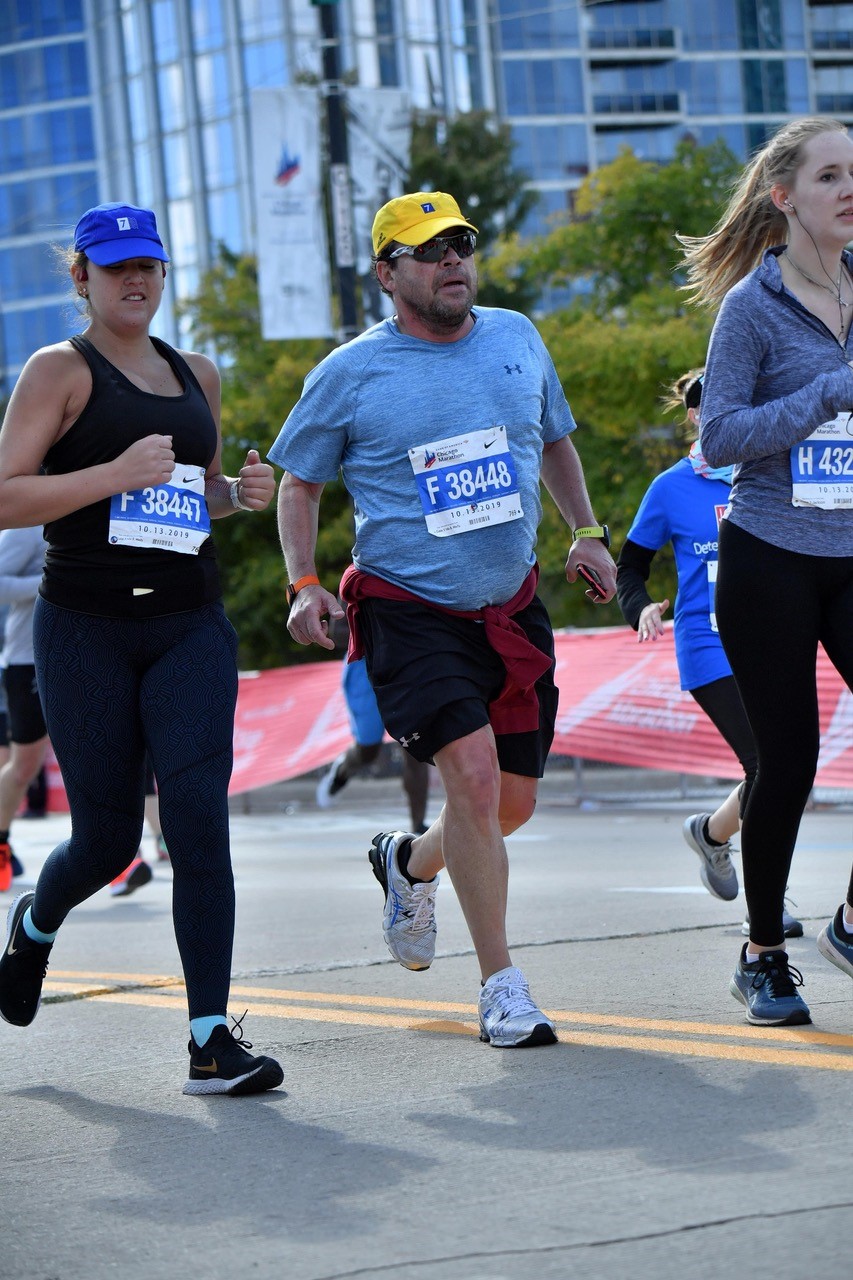