I’ve been swimming for almost 11 hours. Since 5:00 the south coast of the Cook Strait has been close, but I cannot make it. I know the hardest stretch of the swim is coming. The current is dragging me towards the Pacific Ocean. By the 100-degree shift in the orientation of my reference point on the horizon, I realize it is pulling me at a very strong pace.

Nora calls me from the boat and tells me that because the current and wind are dragging us, my pilot Philip Rush is going to move to my left. He wants me to stay parallel to him and, if possible, to raise the pace. Otherwise he knows I’ll never make it.

I don’t even have time to think that I never breathe on my left side—or that, when I’ve tried to, I get out of rhythm and my back hurts. I just concentrate on what I’m doing. Every three strokes I move my head a little to the left. I find I am able to follow the boat without too much difficulty; now to keep up and just get there as soon as possible.

Swimming Cook is not only an event of great physical effort; it requires a lot of mental work, too.

The trip to New Zealand was a long one, about 29 hours since arriving at Mexico City International Airport. During the flight from to San Francisco I began to feel bad. Luckily Ariadna was carrying antibiotics and I was able to start my treatment immediately.

On Monday I felt terrible: my chest hurt a lot, I was coughing constantly and lungs were full of phlegm. It was all I could to go out to have the meeting with Philip. On Tuesday I swam in the pool, not wanting to subject myself to the 16ºC ocean water. Wednesday I did swim in the sea, but it was heavy going. The water was cold, and every time I breathed my chest ached. During most of the swim I was coughing.

Six months ago, when I reached Philipip to confirm my window, he told me it would be between March 18 and 25, but he wanted me to be ready as early as the 16th so we could go if we had a day when the conditions were right. Although he had told us not to look at Windguru.com, we couldn’t help it. So we knew that on Thursday the 16th was expected to be sunny, and almost windless.

While swimming on Wednesday I thought about the possibility of Philip telling me that night that we should swim the next day. If I got his call, would I be prepared? I did relaxation exercises in the water and when I got out I felt better. Luckily we didn’t hear from him that night and didn’t discuss it until Friday, but there was no news that day, either. On Saturday we were supposed to write Nora at 7:30 p.m. At 7:32 I got a message from her letting me know that Philip wanted to talk to us. “Please call him.” When we reached Philip, he said he wanted to see us at the hotel.

In all my years as an open-water swimmer, I had never faced such an unstable climate. On the day we arrived, Windguru showed us two possible dates when the conditions might be right, one on Sunday the 19th and another, that wasn’t as good, on Wednesday the 21st. Later in the week, on Saturday the 25th, another one looked like it would open. That was at the end of our window.

For Sunday March 19, 12 hours of good weather was predicted in which the tides would allow me to swim. Of those 12, there would be five with calm winds but from then on they would intensify until they reached 25 knots —conditions in which it is impossible to swim.

If Philip wanted to schedule the swim, there were two possibilities: we would either leave on Sunday or have to wait for the next Saturday with the risk that the weather would not cooperate and we would miss our window altogether. Nora and I went down to the lobby to find Philip waiting for us.

“We leave tomorrow,” he said. “But I want to tell you what we are going to face. What I can see is that we will have four to five hours with a calm sea; then the winds will begin to pick up. The time will come when we will no longer have conditions to continue swimming.”

I did not get upset. I simply asked, “Do you have any doubts that overall there will be conditions for a crossing?”

“No doubts,” he replied, “but I have to be honest. In the second part of the swim you will face a complicated sea.”

I asked, considering the tide, if he saw another option. “With the information I have today,” he answered, “I don’t see another opportunity in the week. It’s not perfect, but it’s what there is.”

In his hand was a map showing a previous crossing. He traced out the route and told me, “I’m going to need you to make the most of the first four hours…especially the first one. The tide will be pushing us. We have to take advantage of it.”

The translation is simple. You start at maximum capacity and make as much headway as you can. And after the weather degrades, you have to continue to push very hard or you won’t get there. We wrapped up the discussion and agreed on the time and place to meet the next day.

On Sunday we arrived punctually at the pier and were already on the boat before 6:00 AM, meeting with the captain and the crew. After a brief explanation of the safety measures and the location of everything we’d need during the trip, Philip told us: “Today we will have four to five hours of good weather, then the winds will begin to blow. We are expecting a storm with very strong winds. If the conditions are not suitable, I will have to take the swimmer out of the water. I have the last word.”

The message could not be clearer.

We motored out from the dock and arrived at the starting point at about 7:30 AM. It was a beautiful morning. I warmed up with my resistance bands and the team applied my sunscreen lotion and Lassar zinc oxide paste. I was ready. I climbed into the inflatable boat and Philip took me near the rock I needed to touch. The approach was simple, the sea was calm.

The first hour was very good. According to my watch, we went almost 3,800 meters. The next three hours passed with neither pain nor glory.

Between the fourth and the fifth hour I slowed down to 60 strokes per minute (s/m). During the tenth feeding, something curious happened: Philip gave instructions to Nora which she then translated them to me. I could not stand it and jokingly told Nora to ask Philip why he was using a translator. His response was, “She is your trainer—she must tell you what to do. ” A very professional attitude on his part, I thought. Nora asked me not to slow down, since I had reached 64 s/m.

For the next two hours I kept my mind blank, counting from 1 to 50 without letting anything distract me. During the feeding in the seventh hour Philip told me that I had five more to go. Right then I was already at the limit of where I could be in the 12 hours I had to finish.

At that moment I could see the coast clearly. Remembering the palm trees of The Cove in La Jolla or the center anchorage of the Bay Bridge in San Francisco, I asked them to give me a reference point on the horizon. My goal was not to deviate from a straight line.

As time went by, it was increasingly difficult to stay parallel to the boat. The wind was indeed picking up, blowing harder and harder. I remembered the size of the waves of Moloka’I and then Catalina this January and compared them with what I was swimming through now. These waves had nothing on those other ones. They were complicated, sure, but not two and a half meters high.

As I put my thoughts in order, my left hand fell onto a jellyfish about 30 cm around. I never saw it coming, which shows that when I swim all I do is concentrate on my strokes. Later I would learn that I also swam through a very large palm leaf without stopping for a second. For me it was one more plant in the sea that I had to cross. I didn’t have time to contemplate it.

The landmark on the horizon began to move to the left. In the tenth hour’s feeding I was informed that the wind is speed was becoming very fast. They needed me to keep up a pace above 61 s​​/m.

Meanwhile on the boat, without my knowing it, the captain approached Ariadne, Pablo and Ricardo and said, “Things do not look good. We might have to get him out. These winds are going to increase even more, and very soon.”

My point of reference was the setting sun hanging low on the horizon. If I did not arrive soon, I would not see where to land. I decided not to wait for a feeding. I needed to keep moving.

“You’re less than two kilometers away!” Philip yells. That should take me about 40 minutes.

I pick up my pace and can really feel myself moving through the water now. I must have made it past the current. Again I hear Nora and Philip crying, “You’re 800 meters away!” I keep swimming, and then stop for a moment. “Where should I go?” I ask. There are two mounds sticking up from the water with seagulls perched on them. The one on the left is bigger.

“Swim to the left mound!”

I approach and, with just a few meters to go, slow down. I didn’t want a wave to smash me against rocks. Arriving at the mound, I touch it and the seagulls fly away.It is a rock covered with marine plants very soft and pleasant to the touch. It’s a sweet welcome to finish swimming without being scraped or tossed around.

I turn to the boat, lifting six fingers towards them and toward the sky, where Paul’s drone is flying. 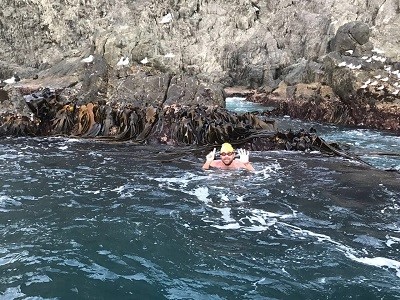