The sea is on my side…

Yesterday was a day of encounters and surprises.

We were in the middle of breakfast when suddenly a western person entered the room. From the news published in OpenWater we knew it was someone from the team that had crossed Tusgaru on Monday. We were dying of curiosity and asked him if he was the swimmer. He explained that no, the swimmer was Daniel Curtis. His name was Diarmuid Herlihy, he said, one one of Daniel’s coaches, along with Valerio Valli.

We talked about their crossing and about Daniel’s previous swims, and said they would see us again at 10 am when Daniel was scheduled to give a report to the staff of Ocean Navy, company that organizes the crossing.

We arrived punctually at the meeting. Thanks to Guillermo Eguiarte we were able to find out that the captain would let us know the day before the window if there was no possibility of proceeding with the swim, and wanted to know what we would say at the time. Nora and I gave our opinions, as did Mike Oram, our English pilot. We all felt that things just happen when they’re supposed to happen.

We took a picture with Daniel, Diarmuid and Valerio and made arrangements to have dinner with them that night at a yakiniku, a Japanese grilled meat restaurant.

We rested a while after breakfast—not necessarily for digestion, because breakfast was fairly meager, but just to pass a few hours. When you’re waiting for your window, everything runs in slow motion. You can’t take things too fast.

At noon we went down to the sea. Near the hotel there is an artificial beach with a wall that protects the stretch from the waves. The entry to the water, over many large and very slippery rocks, was not easy.

The first encounter with the water is like a first kiss. It’s a moment you will always remember—and as in a relationship, it will always be tied to the outcome. For example, my memory of La Mancha in 1999 is one of much pain, Nora and I going hand in hand into a sea that had claimed the life of a friend. My swim was 18 hours 19 minutes of torture. When I swam Catalina in 2008 the water was freezing, 16ºC on the beach. I knew that the crossing was going to hurt me—and it did. I was at the point of getting out of the water several times.

So meeting the water yesterday was important. What would that first encounter leave me feeling?

At the start there were some difficult moments, I could not get in the water and was worried I was going to slip and fall. Once I could make horizontal progress, however, everything flowed. The first big plus was that the water was not cold, and it was a blue I had never seen—a color that reminded me of the title of our book, The Endless Blue.What’s more, my shoulder did not as much.

We spent the first minute within the protected area and then I was able to convince Nora to leave it with us. She is terrified of encountering marine life, especially a shark.

In the open sea the wind was no problem and the water temperature rose to 24°C. We agreed that it was too warm for our liking. Fortunately, the report on Daniel’s swim yesterday established that the water had been a far more swimmable 21°C.

As we moved beyond our objective for the day, I thought about my swim. As my mind went back to the most critical moments I went through in both the Channel and Catalina, I compared them to what I felt as I swam today. I concluded that while Tsugaru is without question a very complicated swim, I have two advantages here—at least on entering the water: the water is not cold and sea received me with open arms, sending a fairly big fish to let me know. 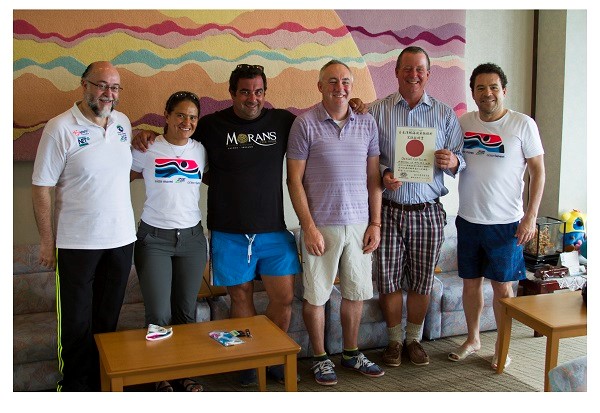 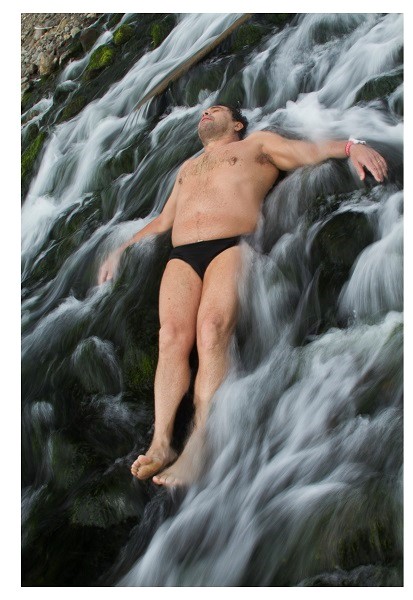