One of the least pleasant surprises I’ve received this year was the change in the classification rules to attempt crossing the North Channel. Before March, a six-hour swim was needed in 15°C water to classify. Now the Irish Long Distance Swimming Association (ILDSA) has announced that to classify you must swim those same six hours at 13 °C.

A two-degree difference may not seem like much, but it is a totally different scenario.

As the water temperature in La Jolla has increased in recent years, my closest option was San Francisco Bay. Since last November I’d considered this possibility. I had trained in Aquatic Park on three occasions, two of with one-hour swims the other three. My experience with these swims gave me reason to believe I was ready to try six hours.

The rules specify that an independent observer must monitor your classification swim. The ILDSA not specify what it means by “independent,” but so as not to make a mistake we asked Suzie Dods, recognized trainer and organizer of open water events, who would certainly qualify. She agreed and we decided on on Saturday May 14 as the day of the test.

On Thursday I flew with Rafa Alvarez, one of the members of my team, San Francisco. I swam on Thursday and Friday. On Saturday I got up at 3:30 am, did Chi Kung, wrote a message to Steven Munatones soon wishing him a quick recovery from his heart attack, and at 5:40 I was already warming up on the dock of Dolphin Club.

For company, Suzie invited Ranie Pearce, who kindly offered to swim with me and help navigate the waters off the cove. At 6:15 we were ready. We began our entry into the cold water with caution, inching gingerly forward until Suzie shouted, “Hey—it doesn’t count until your arms are in the water!” I let myself go, dove forward and began to swim.

The sensation of cold water in the face and back didn’t hurt much, a sign I interpreted as acclimatization. We swam to the west end of the cove, and I welcomed the fact that there was no tension or pain. However, Ranie’s pace was much slower than mine. I did not give much importance; I could either go ahead and then wait, or return for her.

After a completing one lap, I went for my first supply while Ranie decided to go out into the bay. I’d never done that, but I trust her. We left the cove, swam for 45 minutes, and then returned. As time went on I started to feel bad. I couldn’t get into a rhythm because I’m waiting for Ranie, and I began to lose heat. It’s not just the hands and feet where I lost feeling. The cold began to get into my shoulders and quadriceps: that was an alarm signal. I was surely on the way to hypothermia.

By the time I reached my fourth supply, I was feeling very bad. I was in crisis and, if I did not get over it fast, I would not be able to finish the swim. It worried me as I headed back out to the bay—if hypothermia returned, I might not have had enough strength to return to the dock.

I decide that the first step is not to leave the cove. Ranie does not like to swim in circles, but at that moment her likes and dislikes were irrelevant. I needed to be sure. My second choice was to forget Ranie and start swimming at my own pace. I told her my intentions and left.

I focused on the vacuum technique I’ve been practicing with Jaime, and increased the pace of my swimming. On the first lap swimming alone I felt the change in my legs and arms. It took me a few more laps, but in the end I get rid of the incipient hypothermia.

After three hours I knew I there wouldn’t be anything in the way of finishing. Now the challenge was to maintain a steady pace. I practiced different kicks and discover that my hands hurt less if I bent my fingers. I concentrate on the empty place in my stroke and on my kick and, I guess today’s experience would represent only part of what I’ll be living in the North Channel.

The pace I’ve taken let me know how many laps I still have to go. Gradually it is less.

Before I started Kimberly Chambers came to greet me. She wished me luck and told me she would swim from Candlestick Park, the old San Francisco 49ers stadium, to Aquatic Park. Probably we would see each other

When I had two laps to go, I saw that a kayak was approaching, accompanying several swimmers. Those at the front are going very fast. I realize that would be Kimberly’s group. I take an angle to achieve them and, to my surprise, I find her, along with another swimmer. We greeted each other, and she welcomed me, knowing that I was nearly finished with my training swim and told me that we should swim to the dock. We started, increased our speed, increased our speed, increased the speed and suddenly we were going all out. I quickly calculated the distance that separated us from the pier and concluded that we would have to sustain the effort for five minutes. I know what I can bear—this would be my “dessert” of the day, a totally different pain.

We arrived together at the dock, took a picture and I then I realized that I was still missing 45 minutes of swimming. I felt the buildup of lactic acid in my triceps, but I do not care, the sprint was worth it.

While finishing up I met Ranie and we swam the last lap and a half together to finish in six hours, two minutes. Test passed.

Suzie immediately sent me to the showers and sauna. I climbed up into the Dolphin Club and began the return my normal temperature, first with warm water and then gradually increasing the water temperature. It took me half an hour between my first warm shower and the time I can get into the sauna.

I went out and couldn’t find Suzie or Ranie. I felt bad not being able to thank them in person, because without their help it would not have been able to pass the test. To do so, I’ll have to return. 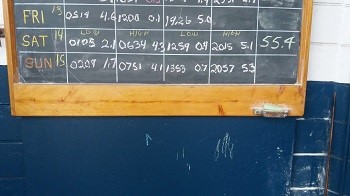 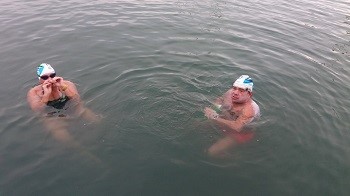 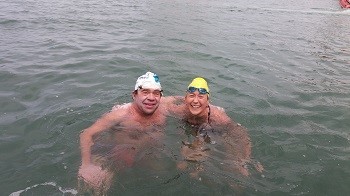