In October 2008, prior to my crossing of the Catalina Channel, Nora and I went swimming in Long Beach. I remember how scared I was when I saw the temperature of the water: 16 degrees Celsius.

The next day would be one of my most difficult experiences—possibly the most demanding swim I’ve ever had. In addition to the wind and waves, the water was actually about 15 degrees. I vividly remember the cold.

When I decided to attempt the Seven Seas, I knew from the beginning that one of my biggest challenges would be crossing the North Channel. The temperature fluctuates between 12 and 14 degrees and, as I said one day to Penny Palfrey, these are temperatures one usually does not encounters in Australia or Mexico.

The Cove, in La Jolla, has been my training center in recent years. I have a regular routine when I travel there, a place to stay and friends to swim with.

The organizer of my swim group is Tom Hecker. I met Tom in 2008 when both were preparing for the Triple Crown. He only had to do Catalina to complete his Triple Crown, while I was going to attempt it the following year.

From the beginning there was chemistry between us. Tom has always helped me—not just showing the different routes when we are swimming, but out of the water as well.

It’s thanks to Tom that I know the La Jolla Athletic Club—a place where one can leave the icy waters and can slide into a deliciously hot Jacuzzi—as well as different restaurants to get breakfast or grab coffee and a roll. He’s also introduced me to several of the swimmers in our group.

Yesterday I met two of them, Frank Whittemore and Michella Thomas. While this is my first time swimming with Michella, Frank, like Tom, has been a frequent partner during my La Jolla swims. We swam several times last year, but I remember with special appreciation how he accompanied me on a 6-hour swim.

When a swimmer in a group is has a long swim scheduled, he announces it to the other members, and those who are comfortable with the distance and have space on their calendars will respond. Frank did the 6-hour swim with me, as I recall, two hours before going to the dentist. I learned that he had read my blog: he told me he liked my account of Tsugaru.

Our current training swim was scheduled for 6:30 yesterday morning. I warned Nora that she had to be punctual, as Tom does not wait for anyone. On the way to The Cove she informed me that she would accompany me during the second part of the training, remaining on the beach for the first two and a half hours while Tom, Frank, Michella and I swam to the dock, did the back leg, and then reached the lifeguard tower.

At The Cove there are several routes, but usually we swim back and forth to the pier, about 4.8 kilometers, then to the lifeguard tower, another 3.2 kilometers.

Before starting the swim the one question I had was, what is the temperature of the water? Taking the previous day as a reference, Tom predicted 58 degrees Fahrenheit—14.4 degrees Celsius.  I had in my mind the 12 degrees I had faced in San Francisco last November, so when I entered the water I felt at ease. Nothing hurt.

The wind blew a little and there were waves in the first part of the route to the dock. The return leg to the beach was complicated by the surf. Frank and Michella left, but Tom and I continued to the tower.

On our return, after 8 kilometers, Nora replaced Tom and we finished our 6 hours without a problem. After getting out of the water we reviewed our times, my performance and all the other information, and we will happily noted that the water temperature was 14.44 degrees Celsius. We see if that is considered valid to qualify for the crossing of the North Channel.

After eating a light recovery meal, we rested and went to dinner early. We were to see each other the next day at 7:20 a.m. to take Ximena running and then go swimming with Tom.

We arrived at The Cove and the beach was deserted. Waves had complicated our entry and exit yesterday. Now a wall of water over 60 meters had come in from the Pacific, hitting the shore parallel to the coast, and the waves were still huge after reaching the beach at The Cove at a 40º angle. Getting in and out was complicated, to say the least.

I approached Tom and asked his opinion. I suggested that we go out at the other end, by The Shores. He thought and asked me, “How do you feel?” “I feel good,” I replied. “If you think we can do it, I’ll go with you.” “Let’s try it.”

With each step we took, the waves looked bigger. I had never seen waves of this size—and this much force. I began to have serious doubts about the enterprise, but it was too late to get out now. Nora and I agreed that it would be an interesting day.

Tom figured the best time make our move, and dove in, starting our attack as the full force of the waves hit us.

Faced with the challenge of making my way through the waves, for a few seconds I forgot the lessons of mechanics that I had recently adopted. It was all I could do to brace myself as hard as I could. As I moved forward, the pain I suddenly felt in my shoulder reminded me to correct my stroke. We managed to pass the first wave. We jumped over the second, but the third pushed us back. We dove, and heading out again, swam as fast as possible. It took us about 5 minutes, but finally we were on the other side of the breakers.

We chose a path and swam for half an hour. In my mind there was no longer any room for the water temperature or the rate at which we were moving. The only thing I could think about was how we would get out of there.

When we agreed to return to that point, I asked Tom how he would do it. A man of few words, replied “We’ll get out like we got in.” That was obvious, but I really wanted a more detailed explanation of our strategy. Nora got a frightened look and told me that she would just stay with me.

We approached the area, covered by foam, where increasingly bigger waves were starting to break. About 200 meters from the entrance I stopped Tom and asked him again what the plan was.

He pointed to a house west of the lifeguard tower. That would be our reference and, when we saw that we were at an angle to the beach, we would enter the Cove.

We took a breath and swam forward. When it seemed as if we were in the right place we stopped to wait for the right wave.

One passed by us, then we missed catching two more. Finally, we got one. We paddled  furiously and braced ourselves, the three of us almost on top of one another, as the wave pushed us forward about 50 meters. The surf was now below my waist, but the force of the water pulled me and my foot hit a rock. I thought we had arrived at last.

I turned to Tom and shouted, “We did it!” “Wait until we’re on the beach,” he replied.

Another wave then rolled over our heads, finally depositing us on the sand. People who had been taking pictures of the sea lions could not believe what they were seeing. We couldn’t believe it ether. But we had done it.

Later we got a video and saw that after we got out the lifeguard had closed the beach to swimmers. The conditions were that bad.

The water may not been less than 14 degrees, as I would have wanted, but today’s adventure will be remain a story of swimming with a really high adrenaline level. 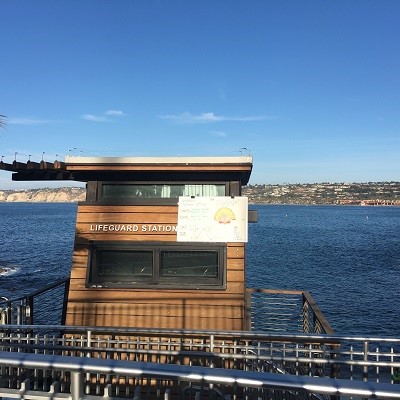