One of the elements that make open water swimming a complicated activity is the climate. You can swim thousands of meters and acclimate to the lowest temperatures, but you cannot do anything about the weather.

Your best option is to observe the information that a meteorological site gives you and from there make your forecast—which will always be at the discretion of the captain, anyway. In other words, you have no control.

Having said that, I have never stopped going to Windguru—a site that provides information about winds in different parts of the world—at least two weeks before my swim window. It’s been no different this time. Before leaving Mexico City I wrote that I saw possible conditions for swimming at the beginning of my window. Since we arrived, however, the conditions have changed at least three times a day.

Today I got up feeling better—and with a question in mind. Could our pilot Phil tell me that we were leaving tomorrow? The speculation had some basis: as of dawn, the only day this week that looked like it could be an option was Thursday. The other possibility was to risk waiting until next week, although according to the forecast no day has looked as good.

I could not stand the suspense and wrote to Phil asking what he thought. He answered immediately, wanting to know how my flu was. I informed him of my progress and told him that I would go swimming in the sea today, because he had already been urging me to try it. We agreed to meet at 11 o’clock.

In the taxi heading to training Nora asked me if I was aware of the possibility of Phil asking me to swim Thursday. Due to changing weather conditions, we’d discussed this scenario when we drew up my travel plans four months ago.

A complement to my strength training has been a warm-up routine with elastic bands before swimming in the pool or the sea. The goal, especially when swimming in cold water, is to raise my pulse and my body temperature by at least 0.5ºC. That way my start is less complicated.

We arrived at the beach and Rafa had Nora and me do different exercises with our body weight and the bands. At the end, Phil approached us.

“Ready to get in the water?”

“Ready,” I replied. “I brought my Restube flotation device in case I cannot swim well.”

At Monday’s meeting Phil had insisted he wanted to see me swim: “I want to know how fast you are.”

After thousands of meters in the water, today I would be evaluated yet again. Option A was for Phil to give me the thumbs up; in Option B he would tell me not to waste my money and to just go back to Mexico. We defined the route—going and returning to the beach via a buoy located at a distance of about 2600 meters. I prepared to depart.

The first swim before a crossing is always special. It is a first encounter with the sea that will be reflected in the coming days.

When I organized my Oceans Seven expedition, I always felt that the temperature of the water gave Cook Strait—much like the North Channel—a greater degree of difficulty. I would find out quickly whether all that training in San Francisco Bay was worth it.

I walked slowly until I the water was around my waist. Turning on my watch, I began to move my arms around vigorously. After 300 meters I waited, then walked for a while, letting my body be aware of everything I felt.

My feet were not cold; ears and face, no problem. I just had a bit of cold in my hands. Though I did not bring a thermometer, my estimate was that the water was at 16ºC—a low temperature, but not one that causes me pain. Then the first full dive into the water.

Tuesday’s training at the pool had been very uncomfortable. I felt as if my arms were made of stone. The pain in the triceps was intense. Prior to swimming today Ricardo applied the Muscular Activity Technique (MAT) and corrected some muscle mismatches. He hoped the session would work. The first 600 meters of swimming weren’t easy, but they were better than yesterday. I focused on technique and my breathing, using my visualization technique to relax. When I got to the buoy I felt good.

All the way the wind was blowing. The waves were not very big, but if you weren’t paying attention, you ended up swallowing seawater. I was surprised by its taste, the most salty I can remember.

An identical leg back from the buoy, this time with currents in a different direction, ended after 52 minutes. I was sure that Phil not only wanted to watch me swim, but to find out if I was handling the cold water well. I came out of the water and the first thing he asked me was, “Are you cold?”

“No,” I responded—steadily and without trembling. San Francisco had paid off.

“Perfect. We will be in touch from Saturday between 7:30 and 8:30 pm. As you’ve probably noticed, the climate here changes very quickly. There is no point in either anxious of us being anxious about predicting the day of the swim. Finish your recovery, acclimate to the water and enjoy Wellington,” Phil said.

As we waved goodbye to Phil and, a local who had been swimming along with us came up. “Wow,” he said, “You swim very well! You will succeed.” 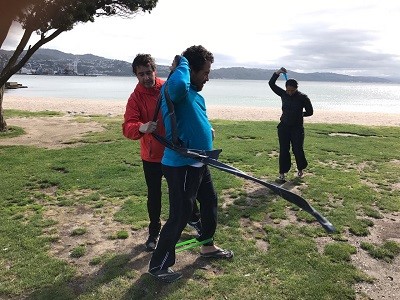 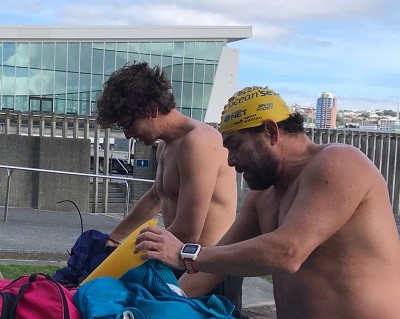 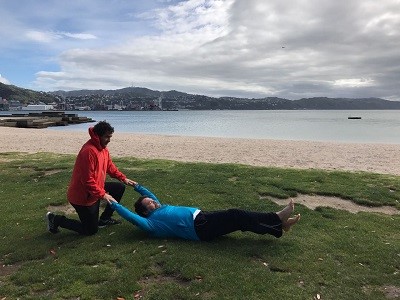 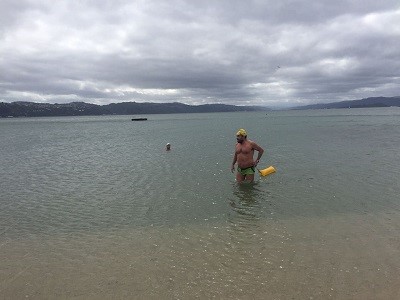