You kept a good pace

To my coaches Nora Toledano, Rafael Alvarez and Ricardo Duron

This weekend I came to La Jolla to train, my last long session before Molokai. I have heard and read different stories about Molokai, the ultimate one, told by Tom Hecker, about a swimmer from La Jolla whose boat crashed before he could even start his swim.

In addition to swimming eight hours, our visit was aimed at seeing if the changes I made to my style had positive results on my shoulder pain, and to evaluate how I was reacting mentally. With any luck the water would be cold, and the waves still relatively strong.

The first sign that I would have a long day was when Tom changed the entry/exit point from The Cove to The Shores. The waves were too strong at The Cove, making it dangerous. Well, my wish about the waves had been fulfilled.

We arrived on time. This time we were accompanied by Rafa Alvarez and Ricardo Duron. Both are helping me, the first with my strength routine and the second with style and mechanics.

The water was 15.5 degrees Celsius, a degree warmer than the last time but still cold. We got ready, agree on the final details of the swim and and feeding, and we jumped into the sea. The first hurdle was to clear the breakers. With five of us trying to make it through, it took us about ten minutes. Waves? I had all I wanted.

We headed south, but the cold water began to wreak havoc on my chest. For most of the first hour I kept coughing, with more and more phlegm coming up. Finally, I stopped coughing. What I thought would be a temporary flu became a week-long infection. Fortunately, medicine has advanced. I can swim.

I made the first four supplies, taking a bag of water and four Accel Gels. At the beginning of the swim I stopped every 30 minutes, because I could not risk it running out of energy. By the third supply, I realized something was wrong. Tom, Michella and Frank told us that they would leave early. The sea was too rough for them. We said goodbye, and as they swam to shore, Nora and I made our way forward to Rafa and Ricardo in the kayak.

That first stage was complicated. Coughing, big waves, and swallowing a lot of water…for a while I thought about what would happen if I just abandoned the swim. But without much company in the water I soon found a better rhythm. Imagining the waves on Molokai, I got into a groove and started to enjoy my training. I kept asking Rafa and Ricardo to move us away from the coast so I could feel the open sea. I was bobbing up and down, but it actually helped to control my stroke and rhythm.

I remembered my swim from Catalina in 2008. At that time the water was a similar temperature and the sea was complicated. For much of the journey I was on the verge of getting out. I suffered a lot.

This swim was marked by pain, too: I couldn’t feel my hands or feet, and my body was cold. Overall, however, it was bearable. I used my mind to imagine a sea equally as choppy, but with a pleasant, Hawaiian temperature. And Molokai drew closer.

The pain was undeniable, however, periodically intensifying in my right arm. I used my “ping pong” technique, and gradually the muscles relaxed. After a while I realized that the stroke on the right side had returned to its natural form. It wasn’t in any way what Ricardo had asked me me to do, but hey, the pain subsided. I decided that today I’d forget about technique for a while.

During one feeding Rafa and Ricardo asked us excitedly if we had seen the dolphins. Apparently a couple of them had been very close to the kayak and one had passed behind us. Neither Nora nor saw them.

A long swim is not a walk by the sea to observe nature. In most open water swims there is no marine life nearby. In the few cases where fish, dolphins, seals or or sea lions do appear, I do not spend time looking at them or following them. I just have to concentrate on swimming or I’ll get distracted. The others were a little frustrated that we hadn’t shared their amazement at the spectacle.

I usually divide my swim into two parts. Yesterday I was hoping, first, for 2.5 to 3 hours with Tom, Michella and Frank in a long circuit, and then two hours more of long laps with breaking waves and stretches between landmarks. For this reason, the supplies we’d brought did not match the actual distances I’m swimming. It’s a trick I play to decouple distance from time.

At 6 hours I knew Nora would be leaving the water. I swam with her to the beach and then returned to the kayak.

I felt the cold throughout my body, but I still had two more hours. At that time I decided to ask Rafa to take me south and get me out of the zone turbulence for a while. The pain in my arms was already intense. I was feeling all the weeks of training. Underneath it all, though, I felt a pleasure. After I’d rested I could surely cross Molokai.

I’m beginning to see the light at the end of the tunnel. It’s been a complicated five months in my life: my arrival at PRI, my induction into the Hall of Fame, the nomination Man of the Year, Christmas holidays, a trip to Europe and a lot of work in my different areas of responsibilities. Molokai, if I have good weather, will be something attainable.

We lined up for the last time and headed to the dock. It took a long time because the waves did not cooperate. We’d wasted 30 minutes and just had to let the waves pass by. I swam one more time to the buoy, Rafa left, I got out by way of the lifeguard tower.

The day ended with a photo of the four of us. I think about how lucky I am. I have three exceptional people supporting me, and so life is easier.

As we do each time we complete long workouts or swims, we finish the day eating by replenishing the lost calories. It’s a time when I can thank those who’ve accompanied me for their support, and I love to remember the stories of the the day past, or those of other swims.

Yesterday Tom joined us at the end of dinner. He came to share dessert. When he sat down, his first question was, “Did you maintain your starting pace for 8 hours?”

“Yes, I kept it,” I replied. At that moment I realized that it was a special day.

Coming from him, a person with extensive experience in open water, I knew that question was a compliment. Yesterday was not an easy day to swim eight hours in La Jolla. 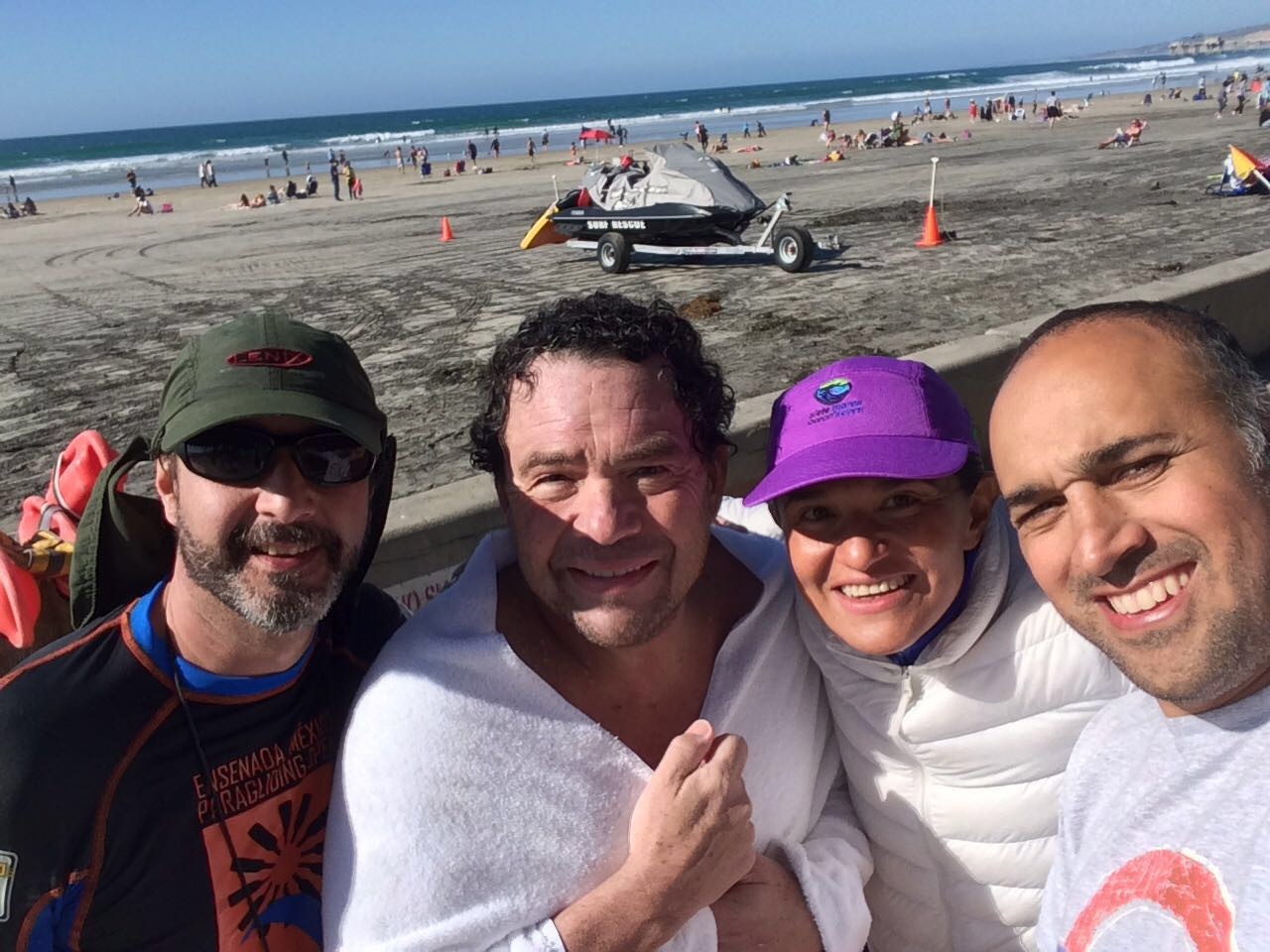